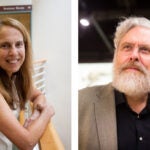 As problem deepens, specialists call for more education — including for doctors

The good news: There is hope. The bad news: not enough people are aware of it. With opioid abuse on the rise, a panel of medical and policy officials convened on Monday at the Harvard T.H. Chan School of Public Health to discuss the growing problem, specifically the results of a national poll by The Boston Globe and the Chan School.

The number of people whose lives are affected by the abuse of prescription opioids, such as Oxycontin and Vicodin, is staggering. As the poll, which was conducted April 7-19, revealed, 39 percent of adults in Massachusetts know someone who has abused prescription drugs, a percentage that mirrors the national numbers. In those cases, 20 percent reported that the abuse led to the user’s death. (The national number is 21 percent.)

As Robert Blendon, the Chan School’s Richard L. Menschel Professor, put it: “One in five know someone who actually died. This is not something we saw on television. This actually permeates people’s lives.”

The causes are complex, agreed the panel, which was moderated the Globe’s health and science editor, Gideon Gil.

“Chronic pain is incredibly common,” said Daniel Alford, director of the Addiction Medicine Residency program at Boston University School of Medicine. “A third of our population has said, yes, they’ve had chronic pain.”

However, while acute pain is usually well managed by opioids — the drugs are called “pain killers,” after all — chronic pain is different. Only about 50 percent of chronic pain responds to these drugs, Alford said, and yet they have become the default treatment. “Chronic pain is a multidimensional problem,” he said. “And if you’re trying to treat it like acute pain, you’re going to run into problems.”

“It’s very clear that [opioids] are being overprescribed,” said Michael Botticelli, director of national drug control policy. Approximately 18 billion opioid pills were dispensed in 2012, he said, “enough to give everyone in the U.S. over 18, 75 pills.” And the problem doesn’t stop there. “Four out of five heroin users who started recently started with prescription pain pills,” he said. The ripple effects include new cases of HIV, AIDS, and hepatitis C.

The panelists said that the response must be multifaceted. The first step is more education, including for doctors. Surprisingly, the panelists said, many physicians do not fully understand the implications of prescribing opioids.

Alford said doctors need to know not only how to assess pain and function but also how to qualify risk in patients who may otherwise seem like good candidates for these incredibly powerful drugs. He advocates training programs that teach medical professionals “how to have a conversation” about behaviors, including smoking, that may increase the risk of substance abuse.

Botticelli gave a compelling example of why such programs are necessary: “As a person in recovery, I have my own experience with physicians who are trying to do the right thing but are trying to give me pain medications, which are antithetical to my own recovery.”

Patients can advocate for their own care — and for their doctors to be more aware. Ask questions, Blendon advised. “If I’m a patient, what should my physician be talking to me about more? What’s available?”

The panel also stressed education for the public. Naloxone — also known as Narcan — was discussed as a means of reversing the effects of an opioid overdose. But even with the use of this nasally administered antidote gaining in acceptance and accessibility, much more help is needed.

“With multiple lenses, people are coming to the same conclusions,” said Monica Bharel, commissioner of the Massachusetts Department of Public Health. What’s needed, she said, is “prevention at the primary level: How can we educate about the dangers and how can we help people and their families?

Perhaps most important, the panelists agreed, opioid abuse needs to be treated as a disease, with the understanding that support and continuing care are crucial to recovery, and no tolerance for stigmatization.

As Botticelli said, “We don’t predicate saving someone’s life from other diseases based on their compliance with treatment. We save their lives because their lives are worth saving.” Families suffering from opioid abuse, he concluded, need to know “there is hope and life and joy on the other side of addiction.”