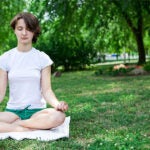 Recent findings open the door for a breakthrough, Tanzi says

The past year has been a hopeful one in the fight against Alzheimer’s disease. New findings have brought clarity to understanding the disease’s progress; new drugs to attack it are in trials.

Rudolph Tanzi, the Joseph P. and Rose F. Kennedy Professor of Child Neurology and Mental Retardation at Harvard Medical School, last month was named to Time magazine’s list of the 100 most influential people in the world for his contributions to that fight, specifically his work uncovering the disease’s genetic underpinnings.

Tanzi spoke with the Gazette about the past, present, and promising future of research into Alzheimer’s disease.

GAZETTE: Where are we with Alzheimer’s, medically and scientifically?

TANZI: We’re a lot farther along now than we were even last year. Back in 1986, as a Harvard student in the graduate school, my doctoral study was to discover the first Alzheimer’s gene, which is the gene that makes the amyloid. [There were also] two more genes that I discovered in 1995 called the presenilins — I say “discovered” but they’re always co-discovered; you always work with others.

Those three genes and a fourth gene — all discovered in the ’80s and ’90s — all lead to excessive accumulation of beta amyloid in the brain. Beta amyloid makes up the plaque. This supported the original hypothesis of a fellow named George Glenner, who back in 1984 discovered what the amyloid was made of. I used his information about that protein to find the gene.

The idea is that amyloid triggers the whole rest of the disease: the tangles that form inside the nerve cells and the inflammation that also kills a lot of nerve cells. But when we put the Alzheimer’s genes into mice, they got amyloid, they got some inflammation, and eventually they got some cognitive problems. You can say it was an Alzheimer’s model, but it really wasn’t because they didn’t get the tangles.

The tangles are made up of the protein tau, which creates these twisted filaments inside the nerve cells and shuts the nerve cell down. In the mouse, the amyloid wasn’t leading to the tangles.

So a lot of people said, “See, the genetics may say it’s the amyloid, but the mouse models say it’s not, because the amyloid didn’t lead to the tangles. So tangles must be coming by themselves.” Then there was a big argument: What causes the disease, the amyloid or the tangles?

Some of us said they both cause the disease, but it starts with the amyloid because the genetics say so. But there were two problems. Amyloid didn’t lead to tangles in mice. And, second, in clinical trial after clinical trial, targeting the amyloid failed.

Either the drugs weren’t potent enough or they were toxic. But then some pretty good therapies were used, like these immunotherapies — these antibodies — and they failed. And so we started to worry a little bit because [the drugs] were removing some amyloid but [the subjects] still weren’t getting better.

Then big news came from a study in Australia, where they tracked amyloid in people’s brains — people who were unaffected and people who had the disease.

What came out of that study was that amyloid accumulates in the brain 15 years before symptoms. So in these trials, you’re treating full-blown Alzheimer’s patients for amyloid, but amyloid had already accumulated, started the disease, and done its job.

It’s kind of like if you have a patient who has congestive heart failure or heart attack and they go to a cardiologist who says, “Here, just take this drug that will lower your cholesterol.” It’s too late. You had to have done that 15 years before.

GAZETTE: So is the model of the disease now that the amyloid accumulates, it creates or in some way triggers the tau protein, and the tau makes the disease?

TANZI: Yes, that’s exactly right, and that’s the second part of the story. Now pharmaceutical companies have started treating patients very early on in the disease. Reisa Sperling at Harvard is treating patients who don’t even have the disease yet, but imaging of the brain shows they have high amyloid so they’re at high risk of getting the disease.

Secondly, Biogen just came out with a study where they treated patients with mild Alzheimer’s with an antibody called BIIB037. And when they removed the amyloid with the antibody, they actually got cognitive improvement. That was a first proof of concept that if you hit amyloid early enough, you can improve the disease.

The Biogen antibody approach was based on a paper we published in 2005, where we showed that there are naturally occurring antibodies in the body, auto antibodies, to fight against amyloid.

Then there was the other study we had last year, Alzheimer’s in a dish. It modeled Alzheimer’s for the first time, where you get both plaque and tangles. We were able to do this in a dish by mimicking the brain with a gel-like substance. That paper rested, finally, that 30-year [amyloid vs. tangles] debate.

We showed that if you use human neurons made from stem cells and you grow it in a gel that mimics the brain, that indeed amyloid causes tangles. So now there’s no doubt. And if you stop the amyloid, you stop the tangles.

You combine that with the new Biogen result and that’s why I say just in the last year, we finally have new clarity.

GAZETTE: So are we at a threshold in our understanding of the disease?

The gene we found back then, called CD33, we now know is the main switch that determines whether there’s inflammation in the brain as a result of all this pathology — the plaque, the tangles, the dying neurons. We know from autopsies people who died cognitively intact — no dementia in their 80s — yet with brains full of plaques and tangles. You ask what protected them: They didn’t have inflammation.

We’ve done whole-genome sequencing of those brains. We’re finding variance in genes that control inflammation. That protected them. So now we know which genes are controlling inflammation. We’re setting up drug screenings using the 3-D model and other models to try to stop neuroinflammation despite rampant plaque and tangle pathology and neuronal cell death. We feel if we can do that, we can probably prevent a lot of Alzheimer’s disease.

So just this year, we came to the realization that genes involved in the immune system control inflammation in the brain, and seem to be the final piece of the puzzle. First you get plaque, then tangles, then that inflammation really pushes you over the slippery slope into dementia. All this says if you have a drug cocktail where you stop amyloid, you prevent the tangles, you chill out inflammation, then you’ll stop this disease.

GAZETTE: How likely is it that that sort of a cocktail will be developed? Are we five, 10, 20, we-don’t-know-how-many years away?

TANZI: For amyloid, you have the Biogen antibody — we’ll see what happens, they’re going right to phase 3 [clinical trials].

I also have two drugs in clinical trials. One, that stops the amyloid from aggregating, is called PBT2, from Prana Biotechnology, a company I founded in my lab. That drug aims to stop the aggregation of the amyloid in the brain so it can clear out. And then we have another drug that is just getting into clinical trials that stops the amyloid from being made, that’s called GSM, which stands for gamma-secretase modulator. So one of them basically turns off the spigot, the other unclogs the drain.

I think Biogen will lead the way in terms of showing how to get amyloids out, but the antibodies they’re making are very expensive. So if you want to prevent this disease in 5 to 10 million people, as the baby boomers get older, it’s going to be tough for health care to cover.

What they’re doing is opening the door with proof of concept. People like us are making little white pills that do the same thing. Hopefully — if we’re successful and it’s safe and it works — it will become what I would consider the statin for Alzheimer’s. I envision a day when you’re 40 years old, you get your brain imaged, if your amyloid looks like it’s too high for your age, then you start taking a drug that brings your amyloid back down.

The second part is the tangles. What if you’ve already made some tangles? The problem is that the tangles spread through the brain. A dying neuron can spit out a tangle, which travels to a healthy neuron and causes a new tangle. In this scenario, it’s like amyloid is the match that lights the fire, but the tangle is the fire that spreads through the brain. And inflammation would be fanning the flames.

A company called C2N based at WashU [Washington University, in St. Louis] just licensed to the pharmaceutical company AbbVie an antibody that stops the tangles from spreading. That is aimed for clinical trials over the next year or so. There you’re hitting the tangles.

For the third part, inflammation, we just learned what the key genes are for neuroinflammation: CD33, and another gene called TREM2. Those are the main targets for stopping inflammation and those drug programs are just starting.

GAZETTE: So if you have Alzheimer’s now, there’s not a lot that is promising, but for prevention of future cases, we have a fairly short horizon?

If you have it now, your best bet is going to be these inflammation drugs, because the amyloid and the tangles have already done their job. Now it’s the inflammation that’s taking you out. Since we know the cells we’re targeting — they’re called microglial cells — we know what the [genetic] targets are, it could happen faster.

But there’s another thing you can do even with everything going wrong. You can protect the neurons from dying even in the face of neuroinflammation. You would try to protect them against free radicals and oxidative stress, because that’s how inflammation kills.

When your glial cells see a lot of dead neurons, the assumption by the glial cells is that this is an infection by a bacteria or a virus or a fungus. The inflammation allows you to shoot out free radicals like little bullets aimed at killing the infection. But in this case it’s actually killing the nerve cells, like friendly fire. So we need to chill them out; I call it a microglial chill pill. And we know that CD33 is the target, TREM2 is the target, so that can happen faster than you would think.

GAZETTE: What did you think when you heard you were on Time’s list of influential people? Is it helpful to your work and to Alzheimer’s research generally?

TANZI: My unit just threw me a big party, they brought in a big potluck lunch and it was great. I said, “You know, this is an honor not just for me but for Alzheimer’s research and for all of you, for everyone doing research against this disease.”

I think it’s great, because it brings Alzheimer’s awareness up. Something like this acts as a vehicle to raise money, to raise support, to raise awareness. That’s what I’m most excited about.

GAZETTE: How does funding for your research break down?

TANZI: About 70 percent of my funding is federal and 30 percent private, with most of the latter coming from Cure Alzheimer’s Fund followed by Boston-area families.