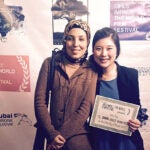 ‘Losing Sight, But Gaining a Vision’

Racha Kirakosian uses a rigorous approach in her class “Middle High German 200,” which explores the cultural context of German-language poetry and scientific and religious texts circa 1050-1500.

But she has long been interested in attracting more students to a topic that could, to the uninitiated, seem daunting.

“I wanted to create a course that would appeal to people who might fear the linguistic side of things,” said Kirakosian, an assistant professor of German and the study of religion whose research includes medieval German mysticism and medieval law.

So she turned to the stage. A sometime actor and director, Kirakosian created “Women’s Voices in Medieval German Literature,” a spring offering that requires no previous experience with medieval languages. The course culminates with a performance at 7 p.m. Wednesday at Arts@29Garden.

In lieu of a final exam, students in “Women’s Voices in German Medieval Literature” created a final performance of spoken word and song.

To help, as the syllabus reads, “elucidate the ways in which women expressed themselves in a world that was dominated by a male written culture,” Kirakosian brought three innovative approaches to class.

First, she made her students act it out.

Students took on the persona of certain characters from the course texts, to be quizzed by classmates about the characters’ actions.

“It’s what I call learning through embodying,” said Kirakosian. “The students had assignments and a paper that combined close readings and historical study with a creative component of how to communicate insights in a performative way.”

That reading included “The Nibelungenlied,” the epic poem in Middle High German about the hero Siegfried and the revenge taken by his widow, Kriemhild. During class, one student delivered a monologue as Brunhilde, the poem’s powerful mythic Valkyrie, who challenges the suitor Gunther to a test of strength. “I am Brunhilde, the woman of wonders, a wonder woman, former Queen of Iceland ― the Ice Queen. I was the most beautiful woman in the world, and I was once the strongest ― stronger, in fact, than any man. Anything they could do, I could do better.”

The role-playing and dialogue are ways “to read between the lines,” Kirakosian added, “and acquire knowledge by actually embodying.”

Kirakosian also read outside the lines. Content-wise, the study of Middle High German revolves around a certain set of canonical Christian-based texts. For a fresh perspective, she added Yiddish works to the mix. The addition offered her students new insights on the evolution of Middle High German and the female voice.

A 17th-century autobiography of a Jewish woman stretched the Middle Ages into the early modern period, Kirakosian acknowledged, “but it helped us to have a dialogue.”

“To integrate Yiddish as a language and understand how it actually related to German,” she said, “was truly a new component in the teaching of medieval German literature.”

Her third innovation evolved as the class progressed. During the semester, Kirakosian challenged the students to think about how they could put their thoughts about some of their readings, which included “The Nibelungenlied” as well as volumes on gender theory and theater, into practice.

Native Yiddish speaker Sonya Hamlin, a former dance professor at Radcliffe and Harvard, and Tal Katsir, an Israeli composer and singer who rearranges medieval melodies attributed to women, were special guests in class and helped develop the course’s final performance, which blends song with the spoken word.

Emma Dowd ’15, who first connected with Kirakosian through the Harvard University Choir, in which they both sing, saw in the course a chance to have fun.

“I thought, ‘I haven’t taken a class like that at Harvard before,’” said Dowd.

Performing for an audience is the “perfect opportunity to share what we’ve been working on,” she said.

“This is an attempt to reach a creative level of understanding, through putting theoretical and historical texts into practice.”

In lieu of a final exam, students in “Women’s Voices in German Medieval Literature” created a final performance of spoken word and song. Here, they practice tongue twisters and other exercises to warm up their voices.