‘Losing Sight, But Gaining a Vision’ 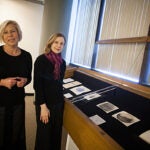 Gloria Hong ’15 won the Grand Jury Prize at the Girls Impact the World (GITW) Film Festival for her short documentary film, “Losing Sight, But Gaining a Vision,” the Department of African and African American Studies announced on April 23.

Hong’s film was made while she was enrolled in AAAS 109: “Using Film for Social Change,” taught by filmmaker and Harvard lecturer Joanna Lipper. The film was selected from more than 100 entries spanning 10 countries in an international competition open to high school and college students who submitted short films that addressed global women’s issues, including education for girls, maternal health, violence against women and girls, and a variety of other issues.

Hong’s film profiles Sara Minkara, a blind Muslim activist and social entrepreneur enrolled at Harvard Kennedy School (M.P.P. ’14). Disabled as a child due to macular degeneration, Minkara has dedicated her life to providing a voice for blind youth, a community that has long been unheard. Her work with disabled children through her nonprofit organization, Empowerment Through Integration (ETI), began in 2009 as a one-month summer camp for 39 sighted and visually impaired children in Tripoli, Lebanon. Its initial goal was to combat the social stigma against blindness, but Minkara quickly realized the lack of support sight-impaired youths received in their communities, schools, and families, and was motivated to do more.

In late March, student filmmakers flew in from all over the country to attend the GITW awards ceremony, which was co-sponsored by Harvard’s Social Innovation Collaborative and held at the Science Center. Lipper introduced Hong’s award-winning film.

Hong’s own early life experiences taught her with the challenges of integration and adaptation. She left Korea as a small child and immigrated to Los Angeles with her parents and sibling. “The place we were to call ‘home’ was a single bedroom that could barely fit a bed — leaving me and my sister the closet to sleep in. Hello, America!” she recalled.

'Losing Sight, But Gaining a Vision'

Harvard senior Gloria Hong’s film profiles Sara Minkara, a blind Muslim activist and social entrepreneur enrolled at Harvard Kennedy School (M.P.P. ’14). Disabled as a child due to macular degeneration, Minkara has dedicated her life to providing a voice for blind youth, a community that has long been unheard.

When asked to describe Hong’s creative process and particular strengths working within the parameters of a filmmaking course at Harvard, Lipper said, “Gloria approached each of her film projects armed with a global-health framework and sociological context as well as her own perspective as an artist and filmmaker. She had great empathy for the disabilities of the target populations she was working with and a highly sophisticated and nuanced understanding of the implications of cultural differences.

“Throughout the filmmaking process,” continued Lipper, “Gloria learned firsthand about the emotional cost of being disabled as well as about discrimination, and she discovered — as the audience does while watching her film — how one highly motivated individual with tremendous support from her family was able to confront and make the best of these challenges with strength, integrity and resilience. Gloria is mature for her age, modest, and deeply respectful of others. I wasn’t surprised when, after completing the film, she was appointed to serve on the board of Sara Minkara’s organization. … Gloria’s experiences as an ETI board member have enabled her to learn a great deal about the blind community across the globe in places like Nicaragua and Lebanon where resources and support are far from adequate, particularly when it comes to youth populations who often face severe restrictions on their movement and access to information and integrated learning opportunities.”

Capping off a stellar year, Hong has also been awarded a Fulbright Scholarship to go to Barbados to make a film and teach local blind youth.

“I took a special interest in learning about the social barriers of disability, and through the course, had the opportunity to work with two nonprofit organizations: one that provides dance as a means of therapy to the elderly, and another which aims to empower blind youth abroad. Through such experience, students witness firsthand the enormous amount of dedication that goes into fighting social issues, and, in my case, join them in their efforts as a filmmaker for their organization. As a graduating senior with postgraduate plans in working with blind youth, I can certainly say that taking the class has been among the most enriching experiences of my Harvard education,” she added.

Lawrence D. Bobo, chairman of the Department of African and African American Studies, called AAAS 109 “a very special course taught by a remarkably talented documentarian in Joanna Lipper. As a department, we could not be prouder of the job she is doing. The incredible critical success of Gloria Hong’s film speaks not just to her talent, but to the special resource this course is for Harvard students.”