Life under the lights and in the lab 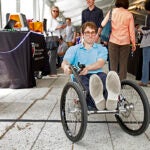 Not your average science fair

There’s a good chance that Elizabeth Leimkuhler ’15 is the only college student who has appeared on reality television and performed cutting-edge research on octopuses.

The talented actress, who after graduating from Harvard College will head to Broadway, said her love for the stage and her interest in science complemented each other perfectly during her undergraduate years.

Leimkuhler has been breathing life into many roles since she arrived on campus. Her strong singing voice landed her parts in Harvard-Radcliffe Dramatic Club musicals, student-led operas at Dunster House, and in the a capella group KeyChange. She also starred as the tyrannical teacher in the one-woman show “Miss Margarida’s Way,” where she saw that acting “wasn’t just a byproduct of having to sing.”

An obsessed animal fan (a life-size stuffed panda sits on her bed), her organismic and evolutionary biology concentration let her revel in the beauty of living things. Recent summers have been devoted to science. She studied Darwin at Oxford and octopuses in Italy. The latter project unfolded along the edge of the Mediterranean Sea, where she worked with the “incredibly intelligent creatures.” But studying animals in captivity, she realized, “wasn’t something I wanted to pursue.”

Her two passions carried her through Harvard, though last fall she began to worry about her post-graduation plans. Then her parents encouraged her to do what she loved. “I realized at that moment that I had to commit,” she said. “I couldn’t see myself being truly happy other than performing. Nothing else can bring me that same joy.”

She found nourishment in Harvard’s student-driven extracurricular theater scene. This year, in addition to performing in several productions, Leimkuhler was vice president of Harvard College Opera, where she worked behind the scenes. The hands-on approach will serve her well in one of the most competitive cities anywhere.

“I am going to move to New York, find some friends, and just make theater wherever you can make it,” she said. “I’ll follow the Harvard model: making theater from the ground up.”

Leimkuhler already knows that the casting process is competitive. As a freshman she auditioned for the short-lived reality show “Duets,” and a chance to sing with John Legend. She missed the final cut, but she didn’t mind. “I just wanted to go back to school, to all my friends,” she told a Connecticut newspaper. “I was missing a lot of fun.”

For Leimkuhler, enjoying what she does is paramount. When her parents asked if she had a backup plan, she considered telling them she would set aside her acting dreams if she hadn’t made it by age 30. “But then I realized that’s giving up, and I don’t want to do that,” she said. “I don’t want to, at age 30, give up on what really makes me happy.”