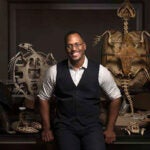 It’s a question that seems to offer tantalizing hope to those suffering from vision impairment. Why is it that when the optic nerve is damaged — either through trauma or disease — few of its neurons survive and fewer still regenerate? Most wither and die.

A new study conducted by Harvard scientists could point to the answer.

The study, led by Joshua Sanes, the Jeff C. Tarr Professor of Molecular and Cellular Biology and director of the Center for Brain Science, and Zhigang He, professor of neurology at Boston Children’s Hospital, is the first to allow researchers to look at neurons that survive and those that don’t side by side, in an effort to understand what surviving neurons are doing that others aren’t. The study is described in a March 18 paper in the journal Neuron.

“The ability to directly compare successes and failures in the very same animal … that’s going to be a big help in understanding the differences between these cells,” Sanes said. “These cells are remarkably similar to each other, and yet one type survives and the other types either die or survive but don’t regenerate.”

The study grew out of a combination of the two central questions pursued by Sanes’ lab and He’s lab.

Using a variety of techniques, including green fluorescent protein, Sanes and colleagues have been able to identify and trace the paths of neural circuits in the retina that connect light-sensing photoreceptors to image-processing retinal ganglion cells.

With axons that stretch through the optic nerve to the rest of the brain, retinal ganglion cells play a critical role in visual processing. Scientists believe there are some 30 types of retinal ganglion cells, each of which performs a specific function — for example, some fire when objects are moving upwards, while others recognize movement in any direction — to preprocess visual information before it reaches the brain.

Meanwhile, He and colleagues had long been using the optic nerve as a model for devising interventions that could coax more neurons to regenerate following an injury.

“If you cut a nerve in the periphery, such as a nerve to a muscle, the axons regenerate quite well and restore function,” Sanes said. “But if you cut axons in the brain or spinal cord, they do not. The same is true if you cut the optic nerve. There’s very little regeneration. A number of people have tried to study what’s going wrong, and whether we can cause those cells to regenerate, with some limited success.”

The two teams began collaborating, Sanes said, with the goal of understanding whether, when the optic nerve is cut, neurons die off uniformly, or whether certain types of cells are more likely to survive.

“The reason this would be important to know is because if it were the latter, then we would have a great way to compare those that survive with those that don’t,” he said. “And, in fact, what we found is that different types of cells die at very, very different levels. There were a few types in which we saw none surviving, and others in which 80 percent of the cells survived.”

The Sanes and He labs found that among the most likely survivors are what are known as “alpha” cells. Though they initially make up just 5 percent of neurons in the optic nerve, they make up 20 percent of the neurons that survive after the optic nerve is cut. The researchers went on to show that alpha cells are the ones that react most strongly to efforts to promote regeneration of axons through the optic nerve. Regeneration will be necessary to reconnect the eye to the brain following injury.

Sanes and He then found clues that may point to the hardiness of alpha cells and their ability to regenerate. “One thing we found was [that] they contain a protein called osteopontin that acts like a growth factor,” Sane said. “It’s not enough to make them regenerate, or else they’d regenerate without extra help, but we found that if we added osteopontin back into the retina in larger amounts, it would promote regeneration of these cells.”

The researchers also administered a second growth factor, called IGF-1, to help spur regeneration of the neurons, Sanes said. Tests later revealed that alpha cells contain receptors for the growth factor, which sets off a signaling cascade in the neurons.

Though there are still outstanding questions about why alpha cells survive where others don’t and whether other cell types can be encouraged to regenerate, Sanes expressed cautious optimism that making side-by-side comparisons could one day lead to advances in restoring damage to the optic nerve.

“There is a lot to be learned about how to get other cell types to be competent to regenerate,” he said. “The good news is we know how to purify these types of cells, and other types of retinal ganglion cells, and compare them. This is a glimmer of hope, but there have been other glimmers in the past that didn’t succeed, so I think we need to be cautious.”