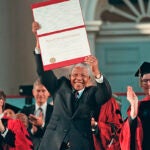 Harvard summer students will have the option of classes on three continents through six new summer-abroad programs being developed and implemented by Harvard faculty, thanks to grants from a fund designed to expand study-abroad opportunities and encourage innovation in those experiences.

“They’ll get immersion in a completely different context, exposure to a different society,” said Tarun Khanna, the Jorge Paulo Lemann Professor at Harvard Business School, director of Harvard’s South Asia Institute, and the architect of a summer study-abroad class that places students in Indian nonprofits that are leveraging the promise of mobile phone technology. “I believe the immersion into a combination of library readings and real-world settings will be very instructive.”

The grants were awarded from the President’s Innovation Fund for International Experiences (PIFIE), which was created to provide seed funding to faculty members to develop academic experiences abroad for Harvard undergraduates. The fund was created as part of David Rockefeller’s donation to support student international experiences, and seeks to encourage participation by faculty members at the graduate schools as well as Harvard College.

The India program, Khanna said, will run from mid-June through mid-August. The heart of the program will occur in Bangalore, one of the centers of India’s high-tech industry, with a side trip to New Delhi. In Bangalore, students will spend several weeks working at one of two organizations that are using mobile phone technology to improve either health care or education. They will meet regularly as a group, led by Harvard instructors, to discuss their experiences and go over related academic content, such as advances in mobile phone technology, regulatory and legal issues, and user behavior. The program includes a debriefing and presentation in the final week in India and a campus debriefing in Cambridge.

Akyeampong, a professor of history and of African and African American Studies, sees this summer’s inaugural program in Dakar as part of a Harvard expansion into four key West African countries. A summer study-abroad program already exists in Ghana and he’d like to see programs established in Nigeria and the Ivory Coast.

“These are four countries that are too important to ignore,” Akyeampong said.

This summer, students will study language, history, and culture in Dakar, with field trips outside the city. The course, to alternate summers with the Ghana program, will be led by Kane, the Prince Alwaleed Bin Talal Professor of Contemporary Islamic Religion and Society.

In Paris, students will embark on a course that Lue, a professor of the practice of molecular and cellular biology, and Alain Viel, a senior lecturer on molecular and cellular biology, described in a proposal “as wildly creative and diverse as the imaginations of the student teams.” Students will study biological evolutionary principles and apply them to the evolution of technology and society in Paris. Students will develop projects that seek to take advantage of the opportunities presented by technology to more fully engage residents in improving urban life.

“The idea of collective contributions to an improved living environment shares many features with the evolution of populations, be they bacteria in a colony, cells in a tissue, or animals in an ecosystem,” Lue wrote. “This project-based program uses the principles of evolution at the molecular, cellular, and population level to innovate new models for engaging the citizens of Paris in meeting the urban challenges of their city.”

In Freiburg, Summer School students will be able to share the experiences that Harvard College students have enjoyed in a semester-long program since 2012, according to Beckert, the Laird Bell Professor of History. The program, to begin in 2016, will explore European answers to questions of the modern world, Beckert said. Support from the President’s Fund, Beckert said, has been critical to the planning process.

“[The program] blends the global and the local to give students an introduction to Europe and a deep international experienced in one of its most beautiful, centrally located cities,” Beckert said. “International experience is an essential part of education today. Students in our program will gain not only an understanding of foreign societies and cultures, but also a better understanding of their home societies and themselves.”

Looking ahead, students will gather in Tbilisi in the summer of 2016 for a nine-week program that will combine Russian language classes with instruction about Georgia and about Russia-Georgia literary and cultural ties, said Clancy, a senior lecturer on Slavic languages and literatures and director of the Slavic Language Program.

“Georgia’s long history, fertile culture, intricate and beautiful language, rich folklore, unique choral and dance traditions, outstanding literary and cinematic history, and major archaeological discoveries will make for a unique international experience for our students,” Clancy said. “Quite simply, the President’s Fund will make this program possible. Support will enable us to explore the region, establish ties, and lay the infrastructure for the program in summer 2016 and beyond.”