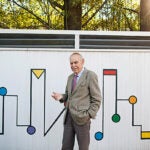 ‘A completely new life was beckoning’

This semester, students in “The Humanities Colloquium: Essential Works 2” (Humanities 10b) started with Samuel Beckett’s “Waiting for Godot” (1953) and ended with Homer’s “The Iliad” (circa 760–710 century B.C.). In between, they read Wolff, Dostoyevsky, Shelley, Hume, Shakespeare, Augustine, Herodotus, and others.

The students also did the equivalent of playing outside. On class outings, they watched plays, pondered great art, considered medievalism, and peered at and paged through rare books at Houghton Library.

Digital natives may read “King Lear” on a Kindle, but to see it in print, in a fragile quarto from 1608, sends an archaic thrill through the brain. Seeing a 2,000-year-old papyrus fragment of “The Iliad” does the same. So does a lingering look at a tiny painted icon from 15th-century Russia, “Birth of John the Baptist,” propped up on a table at the Harvard Art Museums.

Digital natives may also scroll through yards of computer text on slavery and the Civil War. But watching the intimate tragedies of the era acted out on stage, as in “Father Comes Home From the Wars” at the Loeb Drama Center, is to feel and see as well as to read. Sudden insight leaps from the materiality of art: real voices, old books, and fraught paintings ― all meant to be experienced up close.