From ashram to Oxford 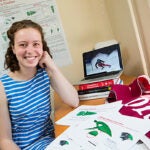 Nishin Nathwani ’15 spent a gap year backpacking in India; An advocate for outsiders, eventually he decided to give college a try

In 2010, Nishin Nathwani was backpacking through India after finishing high school. He wrote poetry, kept a journal, and spent three months at an ashram. By November, he dismissed some earlier misgivings about higher education and decided to go to college. “Harvard,” he said, “was the immediate thought.”

A son of Indian immigrants, a cosmopolitan from a rural town north of Toronto, a black belt in karate, a lifelong pianist, and a social activist who at 17 had spoken at the World Economic Forum in Davos, Nathwani did the only logical thing: He mailed his application in December, without test scores, and for the next month zigzagged by bus, train, and foot to SAT test sites in India. That spring, back at the ashram, he awoke to an email welcoming him to Harvard.

Now 23, Nathwani relates the story as a marker of his last four years. “My life has been shaped by things I could never have foreseen,” said the Phi Beta Kappa social studies concentrator from Dunster House who is bound for Oxford this fall to earn an M.Phil. in political theory. At Harvard, the unforeseeable, magical weaving of his young life has included internships at the World Health Organization and the office of the U.N. High Commissioner for Refugees (UNHCR).

This summer, Nathwani will expand to a global scale a UNHCR confidential report he finished last fall on policy recommendations for lesbian, gay, bisexual, transgender, and intersex (LGBTI) refugee claimants in Africa. “For the first time, we have this flood of data, to understand their plight in their own terms,” he said.

Nathwani understands what it means to be different, as the child of ethnic Indian immigrants from Uganda, who in turn were the children of immigrants from India. “I have a lot of different identities because of my heritage,” said Nathwani. “I was very aware of what difference means.”

At home he spoke English but understood his parents when they spoke Gujarati spiced with Swahili. Nathwani grew up with “a twofold awareness, of being other but also being assimilated.” That gave him built-in empathy for outsiders of every stripe, an early taste for social justice, and an intense curiosity.

At Harvard, he steered that curiosity into the realm of political theory, including two graduate-level seminars with his mentor, Peter E. Gordon, the Amabel P. James Professor of History. Nathwani’s senior thesis, on post-Marxian sociologist Theodor W. Adorno, let him explore the ironic constraints of a seemingly free and democratic postwar West that also discourages independent thinking and alienates many. “I wanted to understand how people are left out,” he said, “what it means to be an Other in this modern world.”

Nathwani uses poetry to that same searching end, and this semester took a workshop with the poet Jorie Graham, Harvard’s Boylston Professor of Oratory and Rhetoric. “Poetry, for me, is very emancipatory,” he said, adding that its embrace of the illogic of existence matches Adorno’s idea that we are all “living in a contradictory world.”

Since his backpacking days in India, Harvard has “socialized me to be more prudent,” said Nathwani. After Oxford he plans to pursue a J.D./Ph.D. program to steer a useful path between academia and policymaking. (It’s a lifestyle he admires in one of his mentors, the Indian political theorist and visiting professor Pratap Bhanu Mehta.) But Nathwani is an admirer of aphorisms too, and one occurred to him on the spot: “Be open to possibilities as life reveals itself to you.”