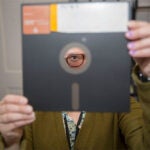 At year-end SEAS fair, students show what they built

Members of the Harvard SEAS Racing Team maneuvered the chassis of their solar-powered car through the crowd and cheers erupted from the bleachers, where throngs of engineering science students watched all-terrain vehicles battle for points on a raised obstacle course.

There was an atmosphere of festivity inside the tent on the Science Center Plaza during the fourth annual Harvard School of Engineering and Applied Sciences (SEAS) Design and Project Fair. The controlled chaos of the May 6 fair offered the Harvard community and general public a taste of the wide range of projects developed at SEAS during the school year.

Melissa Chan ’15 explained how she and teammates Karen Kennedy ’17 and Ibrahim Muhammad ’15 tackled infant jaundice in developing countries for their project in CS179: “Design of Useful and Usable Interactive Systems.” The trio created software that monitors the status of remote infant incubators and alerts equipment donors when hardware maintenance or replacement is required. As is commonly the case for design projects originating in SEAS courses, the group will continue working on the prototype even after final grades have been submitted. Kennedy and her teammates plan to partner with a local nonprofit design firm and do user testing in Haiti and Vietnam.

“This has been a really fulfilling project,” said Niamh Durfee ’16 a student in CS171, a data-visualization course taught by Alexander Lex. Durfee’s team created an interactive display of Hubway bike share usage over the past two years.

“Visualizations are becoming increasingly important and it’s nice to have such an applicable skill,” agreed her teammate Lexi Smith ’16. Durfee is currently involved in computational chemistry research and plans to use her new skills to build a visualization that allows for easy comparison of proteins.

Ryan Kerr ’17, Evan Sandhoefner ’17, and Meng Ting ’17 demonstrated their interactive map of the American electoral process over the past 100 years. Tiffany Cheng and Spyros Ampanados, both students at the Graduate School of Design, displayed their Hydro [CROP] Monitor, a custom-built tool designed to help Corner Stalk, a hydroponic farm in East Boston, understand trends and areas for improvement embedded in the volumes of sensor data the farm collects.

Some SEAS classes challenge students to define and develop their own concepts. Others involve a partnership between faculty and students, such as ES96: “Engineering Problem Solving and Design Project,” taught by James Anderson, Philip S. Weld Professor of Atmospheric Chemistry. Building on Anderson’s existing research and finding areas for improvement, Crystal Stillwell ’15 and Nick Bobbs ’16 developed a weather-balloon-tethered device to measure ozone loss in the stratosphere. Anderson plans to embed the students’ instrument in an atmospheric-monitoring mission targeted for launch in 2017.

Michael D. Smith, Edgerley Family Dean of the Faculty of Arts and Sciences and John H. Finley Jr. Professor of Engineering and Applied Sciences, was an early visitor to the fair, pausing at a high-tech sandbox constructed by the SEAS Active Learning Labs. The earth-science-visualization device lets users create and modify their own topographic model with the sweep of a hand. Anas Chalah, executive director of Active Learning, explained how his team improved upon an existing design developed by engineers at the University of California, Davis. It uses a Microsoft Kinect and a projector to turn a child’s toy into a classroom tool that teaches geologic and hydrologic concepts.

“We’re really excited to partner with other faculty at SEAS and find new uses for this technology,” says Chalah. “The sky is the limit when it comes to what we can invent. We like to think of ourselves as the eyes and ears for the faculty, discovering what new learning tools are out there and then customizing them to make them our own.”

The Active Learning Labs display also featured ornate typographic symbols precisely carved out of 2-inch aluminum by the school’s new water-jet cutter, and a fleet of mobile fabrication carts available for indoor or outdoor use.

“One of the most exhilarating aspects of the SEAS curriculum — for students and faculty — is the opportunity to make stuff,” Lewis observed. “Sometimes it’s really cool, quirky, or fun. Often, it is work that will help solve a real problem and make a significant impact on people’s lives.”