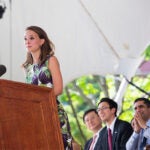 In 2013, Jennifer Chung was working as a software engineer in Seattle when she decided to take CopyrightX, an online legal course offered through Harvard’s edX collaboration with other universities.

Chung’s interest in copyright law stemmed from her hobbies. She wrote fiction and played music in her free time, and so understood the disruptive effect that information technology has had on the intellectual property rights of artists of all kinds.

“It’s basically a body of law that was really relevant to me, based on my hobbies and my profession,” Chung said. “I really enjoyed the course. It was applicable to my interests.”

CopyrightX is part of a culture of experimentation in online learning that has marked HarvardX — the University’s portion of edX — from the beginning. The course pioneered a parallel teaching model for online and on-campus students and, more recently, an additional hybrid model that combines online and in-person learning far from Harvard’s campus.

Rather than substituting online learning for in-person learning as some courses do, HarvardX Faculty Director Robert Lue said the hybrid model seeks instead to combine the strengths of each method, allowing students to view various types of online content, which frees teaching time for more personal interactions.

“For what kinds of learning does online work particularly well? By using it in that manner, can you free up time and persons to focus on the modes of learning — hands-on learning, experiential learning — that are best handled in person?” Lue said. “The idea is to have them complement each other in a very profound way.”

CopyrightX is offered to different student populations in different ways. For instance, the in-person version of the course is offered in a traditional classroom to HLS students. The online version, which is taught in parallel with the campus course, has been offered since edX began in 2012.

The third, hybrid version of the course began almost by accident, according to William Fisher, the WilmerHale Professor of Intellectual Property Law, the course’s main instructor. That first year, he said, a former student asked if she could use the CopyrightX material to teach a parallel course to her students in Jamaica. Fisher agreed. During the course’s second year, instructors at 10 institutions around the world offered it, combining their own in-class instruction with CopyrightX’s online lectures and reading materials. This year, the number of affiliated courses grew to 18, at institutions from Australia to Africa to the Middle East to Europe to the Caribbean to South America.

“The original vision had two dimensions, the Harvard Law School course and the 500 online students. So far as I know, the full integration of a residential course and the online course was itself unprecedented: not just teaching them in parallel, which is unusual, but using the same materials,” Fisher said. “I did not initially contemplate the third layer.”

CS50x, the edX version of Harvard’s popular introductory computer science course, has proven hugely successful — it has over 450,000 registrants as of this spring — and anticipates its own hybrid version this fall at Yale University.

David J. Malan, Gordon McKay Professor of the Practice of Computer Science, said the Yale course is designed to mirror the Harvard on-campus experience as much as possible. It will have the same recorded lectures that online and Harvard students view. It will be overseen by a Yale computer science professor, aided by teaching fellows, as it is on the Harvard campus.

“It’s ultimately motivated by our interest in and my own personal interest in the openness of educational content,” Malan said. “This is surely a good thing for the whole world if we can stand on each other’s shoulders so that we don’t need to reinvent so many wheels.”

Andrew Gordon, the Lee and Juliet Folger Fund Professor of History and an expert on Japan, worked with John Dower and Shigeru Miyagawa at Massachusetts Institute of Technology to design last fall’s “Visualizing Japan,” a unique course on Japanese history that flipped the usual priority of text and illustrative materials, making art, photographs, and other visual media the central focus.

The six-week course had higher-than-average student retention, Gordon said, and prompted a follow-on course about postwar Tokyo taught by a professor at the University of Tokyo. The course created a trove of visual materials that can be used as a resource by faculty members in the future and, Gordon said, the process of co-teaching and co-producing gave him new insights into both history and pedagogy.

“It was like making a documentary movie,” Gordon said. “I was a learner as well as a teacher.”