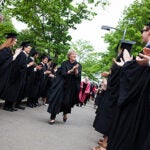 Deep into the past

In a world that blares fear from many megaphones, Harvard President Drew Faust told graduating seniors on Tuesday that their College education can help them to discern real threats from imagined ones, and she recommended they not let fear keep them bound to life’s predictable path.

“The point is, do what you love, whether it is drama or physics or finance. And don’t be afraid to reimagine yourselves. Conan O’Brien thought he was going to devote his life to politics until he discovered the Lampoon, thus launching a brilliant career in comedy,” Faust said. “Digress. Wander.”

Faust spoke at the annual Baccalaureate Service that is held in the Memorial Church, and serves as a farewell to graduating seniors from University president and clergy. The event is restricted to members of the College’s graduating class. First held in 1642, it dates back to Harvard’s earliest days.

To laughter, applause, and cheers, Faust treated the Class of 2015 to a walk down memory lane, from dancing in the mud and rain of Harvard’s 375th birthday party during their first fall to last winter’s historic snowstorms, when in three weeks the University shut down three times, as much as it had in the entire 20th century.

In between, today’s seniors saw victory on the playing field. They innovated and built even as they learned. They rallied to help people affected by Superstorm Sandy, a Philippine typhoon, and Nepal’s recent earthquake. And they helped create the most activist campus year in recent memory. They were the most diverse class in the College’s history and supported an array of causes, including bisexual, lesbian, gay, transgender, and queer rights. They told the world that “I, too, am Harvard,” protested to fight climate change, and marched to emphasize that “Black lives matter.”

Wearing their caps and gowns, the students gathered in the Old Yard in early afternoon. Shortly before the 2 p.m. service, they processed through the Yard, past the John Harvard Statue, into Tercentenary Theatre, and up the stone steps into the church.

Walton, who made introductory remarks, reminded the graduating seniors that this week is called Commencement not because it’s the end of their college careers, but because it is “only the beginning,” and there are always opportunities to continue learning as they make their way through life.

Faust’s speech was part of a program rich in tradition, marked by prayers for the students’ welfare, ancient anthems, and time-honored hymns.

Jake Montgomery, a graduating senior from Cabot House, said Faust’s message resonated with him. The class, he said, probably has a mix of people who are following their dreams and people who are taking a safer route.

“I liked the president’s message,” Montgomery said. “I’m following my dream … to be a poet.”

Montgomery, an English concentrator, said he’s excited for what comes next. He’s enrolled in the University of Iowa’s Writer’s Workshop and will begin working toward a master of fine arts degree in the fall.

Bryan Li, an economics concentrator from Cabot, said he’s planning to work in Taiwan as a tutor for a couple of months this summer and then take the plunge to follow his dream. He plans to move to Los Angeles to work in the film industry, hoping to write and produce.

“It’s cliché, but it’s bittersweet,” Li said of his final days on campus. “I don’t know what I feel. It hits you that you’re leaving.”