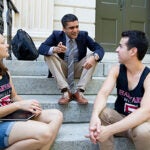 Four years ago, then-Congresswoman Gabrielle Giffords, D-Arizona, was shot in the head and gravely wounded by a gunman in a mass shooting outside a Tucson supermarket.

Most people who suffer such an injury don’t survive, as her husband, Mark Kelly, pointed out. But Giffords fought back.

On Wednesday, taking the podium to a standing ovation at Class Day exercises for Harvard Law School, she urged the students to action.

“Starting tomorrow, you can help change the world. The nation is counting on you, to create, to lead, to innovate,” she said.

“Be bold, be courageous, be your best.”

Kelly, a retired Naval aviator who made four trips to space as an astronaut, commanding the space shuttles Endeavour and Discovery, shared the podium with his wife, drawing on her example to encourage the graduating students to never give up in the face of daunting challenges, and to lead lives of service.

Kelly pointed to his wife as a model of courage and tenacity: “Nearly all people who experience the kind of injury Gabby did — a bullet to the head at near point-blank range — die. But Gabby lived. And she grew stronger every day.

“She has comforted and held the hands of mothers in Minneapolis who had sought safety in a domestic violence shelter. She has testified before Congress — sitting on the other side of the dais for the first time ever, facing her former colleagues.

“She has spoken out against the bitter partisanship that paralyzes Congress — and she has called for compromise and solutions in the middle.

“And she continues to be obsessed — and I mean that as a compliment — obsessed with encouraging young people to serve.”

Giffords served as U.S. Representative from Arizona’s 8th Congressional District from 2007 to 2012. She was meeting with constituents in the moments before the attack, which left six dead and 13 injured.

Giffords returned to Capitol Hill less than seven months after the incident. She resigned her seat in 2012 to focus on her recovery. Upon stepping down, she announced, “I will return, and we will work for Arizona and this great country.”