An advocate for others 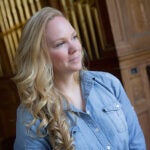 Ready to change the world

Veronica Gloria ’15 first arrived at Harvard “like a spy.”

“I was very quiet and would pay attention to everything. I’d listen to how people talked and formed their ideas and watched how they networked,” she said. “I wasn’t yet doing any of that. I was just watching.”

Growing up the daughter of Mexican immigrants in Joliet, Ill., Gloria always felt visible because of her ethnicity, and invisible for the same reason. “Joliet is a diverse suburb, but it’s also pretty segregated,” she said. “Growing up there, the demographics were changing very quickly, and [are] still changing to this day. I remember going to school with several classmates and teachers who would say uninformed things about immigrants and people of color because they didn’t understand what that change meant.”

At Harvard, Gloria felt especially singular: She’s one of a small cadre of first-generation college students.

Encouraged by her brother to apply to the University, Gloria said she had internalized some high school teachers’ words: that she wouldn’t go far. But her brother insisted, telling her that he wanted to see her name and Harvard’s on the same piece of paper, whether it was an acceptance or a rejection.

A self-described “nerd,” Gloria said that even at a young age she knew she wanted to be a bridge between minority and immigrant communities and the rest of society. “I thought, how can we understand each other, and how can we move together toward justice?”

Gloria hit the ground running at Harvard, where she said she learned the terminology to better talk about immigrant and minority issues. She joined the student groups Fuerza Latina and Act on a Dream, mentored local immigrant students through the College Access Program, and served on the executive board of the new First Generation Student Union. While Harvard offered lots of resources for students, Gloria noticed “a lot of first-gen and Latino students still were feeling marginalized and were falling through the cracks of an institution that is in the process of learning how to support a diverse student body.”

So she helped set up meetings between administrators and students who would relay their struggles. The concern, she said, was, “Even though we’ve made it to a place with a lot of resources, how do we navigate these resources, and how are they still not meeting our needs?”

She found herself the chosen advocate among her peers, who’d arrive at her doorstep to discuss their experiences. This spurred Gloria to take a deeper look. She set up a focus group and shared her findings with Harvard University Health Services on the mental health of Latino students. Gloria was inspired to “bring together an intergenerational task force, [Advocating] for Latinx Studies at Harvard,” she said. “This task force has brought a lot of energy and conversations that look very promising for making change soon.”

After graduation, Gloria will head to Puebla, Mexico, to work with local communities as part of the University of Southern California’s Latino Mental Health Research Training Program.

“At times I’ve felt isolated, but I just had to go with my gut and keep pushing and pursuing the things that I knew mattered,” she said. “And I learned how sharing our stories and raising our voices can be empowering.

“I hope that through my work and other students’ initiatives we can make resources more accessible and more supportive, because a lot of us have talent, ideas, and good things to offer. If given the possibility and support, we can really run with it.”