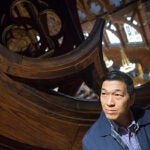 With experience at his fingertips

Not long ago, Elizabeth Strong ’15 was carving a path toward the rarefied field of professional sports. The Colorado native had attended the Vail Ski and Snowboard Academy, a high school for elite alpine skiers and boarders where classes were sandwiched among training, practices, and competitions. To prepare for the long ski season, Strong and her classmates trained in South America in the fall and then traveled to Canada and Europe for races in winter.

While many of her classmates went on to pursue Olympic glory, Strong, a coveted collegiate recruit, came to Harvard confident in her skiing ability (her twin sister, Anne, will captain the Dartmouth College ski team next season), but less certain how her academic life would unfold.

“I had no idea what to expect coming here, and it was definitely intimidating” to come to Harvard from a high school where athletics were the top priority, she said. “But it’s been really exciting, and it’s really fun being in the middle of something where everyone is really excited about what they’re doing.”

As a competitive skier, Strong regularly rose before dawn and made her way from Cabot House to Harvard’s athletic facilities in Allston to make the two-hour trip to New Hampshire with her coach and teammates for practice. By the time she disembarked at the Science Center for her first class of the day, it would be early afternoon. On weekends, Strong left town to compete in collegiate and international races during a ski season that ran from October to April. That grueling schedule made it difficult for her to be fully immersed in her new and growing passion for mechanical engineering. So this year, she chose to set competitive skiing aside.

“I came here as a fully dedicated athlete. It was the only thing I knew how to do,” Strong said. But “each year academics became a bigger and bigger part of my life.”

In summer, Strong worked in a materials science lab, and designed beams, roofs, and a building foundation for a local structural engineering firm. She also helped study the structural integrity of beams holding up an old Boston wharf. “That was really fun, and I realized I wanted to figure out why something is working instead of designing something to work,” she said.

Strong’s senior thesis looked at the link between the shape and the performance of bird beaks on Darwin’s famous finches. Using finite element analysis, fine CT scans of the beaks were converted into complex computer models. The models were then tested to see how stress is distributed throughout the beak when force is applied, in the hope of learning if beak shape affects what the birds can eat (it does) and whether form does indeed follow function (why, yes, it does).

“More broadly, what I’m interested in is the idea that nature has already solved a lot of structural problems, so if we can look at natural solutions, maybe we can learn something that we can engineer ourselves,” Strong said.

Strong will enter graduate school at Massachusetts Institute of Technology in the fall to begin work on a Ph.D. in mechanical engineering.

“What’s been amazing for me is to follow her evolution,” said Strong’s thesis adviser, Katia Bertoldi, the John L. Loeb Associate Professor of the Natural Sciences at the School of Engineering and Applied Sciences (SEAS). “She came here with the goal to be an awesome skier — and she did — but then she’s grown, and now her dream is to be a faculty member. It’s been fun to see.”