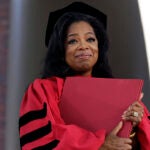 When she graduates from the Kennedy School, Fadumo Dayib plans to run for president of Somalia

For Fadumo Dayib, the notion of home is a complicated one.

A Mason Fellow in the Mid-Career Master in Public Administration program at the Harvard Kennedy School (HKS), Dayib was born in Kenya, the daughter of uneducated Somali parents. Her father, a truck driver, and her mother, a “nomad,” had left Somalia to start their new life together in neighboring Kenya.

But the history of political and ethnic tensions between the two countries meant she and her family were never accepted by Kenyan society, said Dayib. In 1989, they were arrested and deported amid the spread of civil war in Somalia.

“One of my earliest memories of being a second-class citizen, an unwanted person, a displaced person, was when they handed me a small card that said, ‘Go home,’” Dayib recalled. “And that was the boarding pass that I used to get on Somali Airlines to leave Kenya.”

Finland offered asylum to Dayib’s family, as it did to thousands of Somali refugees. But she felt that the refugee community was largely marginalized, tolerated but never truly wanted. Still, Dayib built a life there. She got married, had children, and found work as a nurse. Although she didn’t learn to read and write until age 14, she went on to get a master’s degree in health care sciences, and later a master’s in public health.

Still, she felt unfulfilled. A deep desire to help those suffering in Somalia gnawed at her. “I have to be there,” she told her husband. So in 2005, she left her family in Finland, taking only her breast-feeding baby along, and joined the United Nations and headed to Puntland, Somalia.

“The first night I slept soundly. I felt I was at home. I was on a mattress, but that was the best thing I ever could have ever done in my life,” Dayib said. “And I never looked back.”

With the U.N., she worked on maternal health issues and mother-to-child HIV transmission prevention, setting up clinics across Somalia. But security concerns prompted the U.N. to evacuate her to Nairobi six months later. More troubling, she said, was the hostility and distrust Dayib felt from Somalis, the very people she was trying to aid.

“It was very similar to what the Finns were telling me: ‘Leave this country, you’re taking over our jobs,’” said Dayib. “So I’m like, ‘Where am I going to go?’ I left Finland because I felt unwanted, and I thought I can help you, and I really think I can help you.’ So, where do I belong?”

Reunited with her family, Dayib went to Fiji and Liberia, where she helped set up HIV prevention offices and trained health care providers for the U.N. over the next several years.

Seeing Liberia, which had recently emerged from its own long-term strife, brought Dayib’s thoughts once again to her ancestral land. “Why can’t Somalia be like this? I want to be in an environment like this where you don’t hear gunfire, girls are going to school, women are working, people feel happy,” she said.

So in 2013, she began work on a Ph.D. at the University of Helsinki on women’s governmental participation and empowerment in post-conflict societies.

After taking a break to attend HKS starting last fall, Dayib has high goals. She is preparing to run for president of Somalia in 2016.

“It almost belittles what she’s trying to do to say she’s attempting to make history,” said Steve Jarding, a lecturer in public policy at HKS who teaches campaign management and political strategy. “It’s a bit more than that. I think it’s a profile in courage” for Dayib to seek office in a place where there are such “huge personal risks involved.” But with her “charisma,” “drive” and “remarkable” sense of public service, Jarding said Dayib has the power to unite the Somali diaspora and perhaps stir real change regardless of the election outcome. “I think in so many ways, Somalia and the world are already better.”