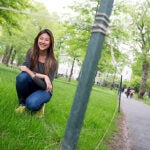 Harvard’s awarding of honorary degrees began a tradition to follow

Throughout its 364 commencements, Harvard has awarded hundreds of honorary degrees. In 1753, Benjamin Franklin was granted a master of arts degree, which is generally considered to be the first true honorary degree awarded by Harvard. The first female recipient was Helen Keller, in 1955.

Mandela was one of a select few who were awarded degrees at special convocations other than Commencement. The first was George Washington in 1776, shortly after he drove the British troops from Boston. More than a century and a half later, Winston Churchill received a degree during World War II. For safety reasons, his visit was unannounced; the University gathered together under the guise of an academic meeting. At his own convocation in 1998, Mandela, the anti-apartheid revolutionary who became South Africa’s first black president after being imprisoned for 27 years, received his degree.

Occasionally, a degree is awarded to someone outside the realm of academia or government. Oseola McCarty, an honorand in 1996, was forced to leave school after the sixth grade, and made a living doing laundry for the next 75 years. At 87, McCarty donated her life savings of $150,000 to help needy black college students in her hometown of Hattiesburg, Miss. She subsequently was given the Citizens Medal by President Bill Clinton.