You are when you eat 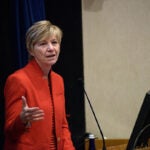 A new study may help explain why glucose tolerance — the ability to regulate blood-sugar levels — is lower at dinner than at breakfast for healthy people, and why shift workers are at increased risk of diabetes.

In a highly controlled study of 14 healthy individuals, a team led by researchers from Harvard-affiliated Brigham and Women’s Hospital (BWH) measured the independent influences that behavioral factors (mealtime, sleep/wake cycle, and more), the body’s internal clock (circadian system), and misalignment between these two components had on a person’s ability to control blood-sugar levels. The team reports its findings — with implications for shift workers and for the general public — in the week of April 13 in PNAS.

“Our study underscores that it’s not just what you eat, but also when you eat that greatly influences blood-sugar regulation, and that has important health consequences,” said co-corresponding author Frank Scheer, Harvard Medical School (HMS) associate neuroscientist and assistant professor of medicine in the Division of Sleep and Circadian Disorders and Departments of Medicine and Neurology at BWH. “Our findings suggest that the circadian system strongly affects glucose tolerance, independent from the feeding/fasting and sleep/wake cycles.”

In the new study, led by Scheer and co-corresponding author Christopher Morris, an HMS instructor of medicine at the Division of Sleep and Circadian Disorders, participants took part in two protocols. In the first, the participants had their first meal of the day (“breakfast”) at 8 a.m. and their last meal of the day (“dinner”) at 8 p.m. and slept at night. In the second, their schedules were reversed by 12 hours, with breakfast at 8 p.m. and dinner at 8 a.m., and they were scheduled to sleep during the day. The meals themselves were identical. The research team measured levels of glucose and insulin at 10-minute intervals after each meal and hourly throughout the full sleep/wake cycle, among a number of other hormones.

The team found that glucose levels after identical meals were 17 percent higher (i.e., lower glucose tolerance) in the evening than in the morning, independent of when a participant slept or had their meals. They also found that simulated night work (sleeping during the day, having breakfast at 8 p.m., etc.), lowered glucose tolerance throughout multiple days. This phenomenon, which the researchers refer to as “circadian misalignment” may have important implications for shift workers.

“These two effects appear to be mediated, at least in part, by two different insulin-related mechanisms,” said Morris. A circadian-regulated drop in early phase insulin response (as a measure of pancreatic beta-cell function) appeared to explain, at least in part, the difference between in glucose tolerance in the evening and in the morning. Circadian misalignment, on the other hand, was associated with signs of decreased insulin sensitivity but no disruptions in early phase insulin response. The researchers hypothesize that conflicting signals from the body’s central internal clock and the behavioral cycle to various organs, such as the liver and pancreas, may contribute to these effects of misalignment on glucose control.

The new work may help the team and others develop and improve strategies for controlling glucose levels in day-active people and night workers. In addition to considering the roles of diet and exercise, some groups are pursuing drugs that may help regulate blood sugar levels in shift workers. Scheer, Morris, and their colleagues are focusing on the role of meal timing.

“Because night work will never disappear, we’re investigating whether it’s possible to schedule food intake to occur at more advantageous times,” said Scheer, who is also the director of the Medical Chronobiology Program at BWH. “By better understanding the key factors that contribute to changes in glucose tolerance, we may be able to find better strategies to help mitigate the risk of diabetes for shift workers.”