An inspiration to students 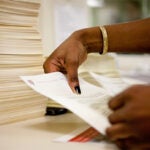 As a black kid growing up in the South Bronx, Nuha Saho ’18 said he had no role models in science. “This shook my confidence and made me doubt my place as a scientist,” he said.

In paying tribute to Professor of Astronomy Alyssa A. Goodman, the Harvard Foundation’s 2015 Scientist of the Year, Saho, now a student at Harvard, said he couldn’t help but be inspired by her.

“This year we honor you for helping us realize that science can be incredibly cool, fun, and more importantly, can make a huge difference,” said Saho, one of the co-coordinators of a science conference that began with a March 27 luncheon in tribute to Goodman.

“We honor you … because we believe that you have instilled the belief in your students that they can achieve anything possible,” said Saho.

“Professor Goodman’s success is the story of a girl who wanted to be Jacques Cousteau but grew up and took her passion for exploring into an even greater frontier: space,” Chia said. “I’d just like to personally express my incredible respect for a woman who has taken on the incredible mission of mapping out the darkness of space and exploring the realm of the universe beyond our world, and more importantly, showing us that the world of science is accessible to all who are willing to put in the hard work and passion. There are no limits.”

Goodman’s research and teaching interests span astronomy, data visualization, and online systems for research and education. In her astronomical pursuits, she and her research group at the Harvard-Smithsonian Center for Astrophysics (CfA) study the dense gas between the stars. They are particularly interested in how interstellar gas arranges itself into new stars.

Goodman co-founded the Initiative in Innovative Computing at Harvard and served as its director from 2005 to 2008. The initiative created a University-wide interdisciplinary center. More recently, Goodman organized a diverse group of researchers, librarians, and software developers into an ongoing effort known as Seamless Astronomy, which aims to develop, refine, and share tools that accelerate the pace of scientific research, especially in astronomy.

The Scientist of the Year Award honors the recipient for her or his scientific achievements, and for promoting initiatives that serve to increase diversity in all areas of science, engineering, and mathematics.

Goodman said she was lucky because, “My parents never thought it was weird to be a woman in science, so I never make a big deal of it.” In accepting the award, she gave “most of the credit” to them as they sat in the audience. And, she added with a chuckle, “to my sister, who said ‘Do I really have to listen to all those people say nice things about you?’”