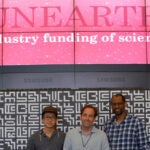 Fighting forest fires is rife with danger, and perhaps most frightening is the fact that slow-moving fires can suddenly erupt into fast-moving, deadly blazes. It’s a moment that firefighters dread, and that seems almost impossible to predict.

A postdoctoral fellow in the lab of George Whitesides, the Woodford L. and Ann A. Flowers University Professor, Fox is the author of a new study in which researchers were able to predict when test flames in the lab were likely to switch from slow- to fast-moving. Their efforts eventually could open the way to making similar predictions for forest fires. The study is described in a paper recently published in the Proceedings of the National Academy of Sciences.

“At the moment, these abrupt transitions in rates of spread are considered to be unpredictable,” Fox said. “Our experimental results suggest that may not be true. … Certain flame behaviors may warn when eruptive transitions are likely to occur. In a forest fire, these behaviors could warn firefighters to keep their distance.”

It’s impossible to bring a forest fire into the lab, of course, so to understand how flames propagate in complex environments, Fox developed a model system: an ignited strip of nitrocellulose.

“Under the same set of conditions, there are two stable states,” Fox said. “Using this model system, we sought to identify patterns in flame dynamics (the movements of the flame) that might warn us when a slowly moving flame was likely to erupt into a rapidly moving flame. We found them.”

Fox said the flames displayed a behavior known as “critical slowing down.”

“Under conditions where transitions to the rapidly moving flame became more likely, the system recovered more slowly from perturbations,” Fox said. “We perturbed the system by placing a fold in the nitrocellulose strip. Upon encountering the fold, slowly moving flames would, in some instances, transition to rapidly moving flames; in other instances, they would recover without transitioning. We measured how long these flames, in the latter case, took to recover. Under conditions where slow-to-fast transitions were more likely, recovery times were much longer. This is the very definition of critical slowing down.”

Perturbations, however, don’t only come from obstacles created by researchers.

“Naturally, the flame is subjected to what are called stochastic perturbations,” Fox said. “These are perturbations caused by small movements of air and other random events. Those subtle environmental changes can cause flames to flicker. As we watched these flickers with a high-speed camera, we were able to see the same slowing down that we observed with flames recovering from folds in the strip.”

Though other researchers have hypothesized that natural fluctuations in everything from financial markets to climate could exhibit symptoms of critical slowing down, Fox said the new study is the first to demonstrate the phenomenon in fire.

“You can imagine that it’s difficult to perturb something like climate, but scientists can monitor fluctuations in the concentration of CO2, and look for signs of critical slowing down that might warn of impending climatic shifts,” he said.

Fox warned, however, that more work is needed before scientists can say for sure whether forest fires exhibit symptoms of critical slowing down similar to those displayed by flames in their model system.

“We can’t make a direct connection because, obviously, this is a burning strip of paper, and a forest fire is a forest fire. There are some issues with scaling,” Fox said. “But, interestingly, both systems contain a key ingredient of bi-stability: a mechanism of positive feedback. In our model system, this feedback stabilizes the formation of a second stable state, the rapidly moving flame. This flame moves the nitrocellulose strip and simultaneously shifts its position on the strip in response to such movements. Forest fires have a conceptually similar mechanism of feedback: wind-fire coupling. Wind influences the spread of a moving fire, and that fire releases heat, thereby altering — often enhancing — local wind speeds. If fast-moving fires, sustained by wind-fire coupling, represent a second stable state, forest fires, like flames in our model system, might exhibit symptoms of critical slowing down that warn when fast-moving fires are likely to erupt.”

Going forward, Fox said, he hopes to conduct new studies to examine whether forest fires, like those in the lab, can be bi-stable, whether mechanisms of feedback can be incorporated into predictive models of fire spread, and whether firefighters working on the front lines might be able to detect symptoms of critical slowing down.

“Then we might begin to understand how to incorporate these warning signals into actionable information for fire-response teams,” he said.