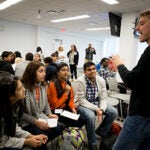 A call for ideas

A freshman returns to Visitas, and views new arrivals’ weekend with fresh eyes

The upperclassman’s words were etched in my memory. When I attended Visitas 2014, a junior student said, “Pre-frosh are so easy to spot.” I was left wondering what exactly made them so easy to pick out? As I walked through the Yard during Visitas 2015 last weekend, I finally understood.

The admitted students were moving in large groups sporting telltale Harvard drawstring totes, trying to take in everything the campus has to offer in one weekend. Their presence served as a reality check of how much I’ve grown (or aged) in the past 52 weeks. Watching a gaggle of pre-frosh traverse the Yard to take selfies with the John Harvard Statue, I acknowledged the milestone of my final days of freshman classes.

Visitas 2014 not only left me with a stack of promotional brochures, maps, and fellow students’ phone numbers, it showed me firsthand the breadth of courses available to fit just about any educational goal and dream. Aside from the myriad presentations and socials, the most significant event was the meet-and-greet with humanities faculty and undergraduate concentrators. I returned to Visitas Saturday as an avid student of the humanities and correspondent for the Gazette.

Walking into the Barker Center’s Arts Café, I helped welcome droves of pre-frosh, encouraging them to mix with eminent faculty and undergraduate concentrators, their soon-to-be humanities brethren. The conversations were diverse and interesting, ranging from a discussion of Plato’s “Republic” to dance and music curricula. It was comforting and exciting to see that the bustling café was ground zero for the future of the humanities.

After meeting many humanities-interested pre-frosh with a variety of academic interests, the single most common and relevant question I fielded was, “What are my employment options after graduating with a humanities concentration?” Having asked the same question in 2014, I was eager to share what I have learned on this topic. My initial response seemed overly simplistic, namely “Whatever you want to do.” As they were about to dismiss anything more I had to say, I quickly added, “The humanities give you the analytical and critical thinking skills valued by employers.”

I also told them that with a humanities concentration, they would have a host of things to discuss in interviews. A student of history, classics, art history, or any of the humanities will never run out of interesting conversations. Citing a long list of successful humanities alums helped reassure students that following their passions would give them all the knowledge they needed to follow suit after leaving campus.

Over the past year, I could not help but notice sporadic headlines pronouncing the humanities “in decline,” or “not relevant in today’s technical world.” Though I knew these statements were fallacious, the passionate horde of brilliant future Harvard humanities students eliminated all doubts. As the pre-frosh mingled with renowned professors, it was clear that the humanities were not just alive and well, but growing and thriving.

Visitas 2015 served as a reminder of the diverse cultural, intellectual, and recreational offerings available to Harvard students. Re-experiencing this vibrant aspect of student life reminded me of what makes our student body seem more like family than fellow members of an institution of learning. Representing Native Americans at Harvard College (NAHC) in welcoming incoming freshman, I met large numbers of students in search of a group to which they will belong. It was satisfying to connect with Native American members of the Class of 2019, future members of NAHC. But I was surprised and grateful to see that many investigating NAHC were not native, but wished to learn about diversity on campus.

Our main event, the Frybread Formal (which incidentally is not a formal at all, much to the surprise of a suit-wearing pre-frosh), was an opportunity for new admits to meet both incoming and veteran native students. Meeting all the new students was important, as they will be the new members of our campus family and the future of our group.

Over the course of the Visitas weekend, I began to see how these incoming freshmen will meld to form Harvard’s next generation. I hosted a Cuban national, who proudly declared that he was the first to arrive since the Revolution. Meeting students from around the country and the world was inspiring and encouraging.

The evening before my pre-frosh was scheduled to depart, I took him out for burgers and heard his reflections on Visitas. As he shared his excitement, I saw myself in him. Just a year before, I sat in the same place, talking about how life would be for me as a freshman. I shared in the anticipation and optimism of each student I met, whether at the humanities mixer, the Frybread Formal, or walking across the Yard. After he politely thanked me for being his host, I told him that every once in a while, if you’re lucky, something surpasses your expectations. For me, that something is life at Harvard.

Matthew DeShaw is a freshman residing in Hurlbut Hall. He writes occasional columns about his College experiences.