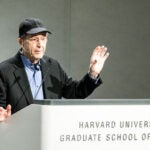 The unheard melodies of speech

He strolls the malecón, the capital city’s coastal esplanade, passing through dilapidated neighborhoods, spending hours “just walking and walking and walking,” he said, moving beyond tourist spheres in search of gritty slices of authentic Cuban life.

And when he finds them, he photographs them. “There’s so much life in the Cuban street,” he said.

Often approaching his subjects from two to three miles away, usually from some height, Hansen snaps, later close-cropping his photos — a technique that lends a painterly effect to the city’s already colorful rusticity. “It’s in the close cropping where I often find things that are interesting, or delightful, or unnoticed,” said Hansen, a senior lecturer on social studies at Harvard.

These long walks have produced a cache of photographs that Hansen is showing at the Belmont Gallery of Art now through May. “Cuba is simultaneously beautiful and sad, and you can see it all there,” he said, everything from the architecture to fisherman along the malecón to “kids living on a knife’s edge.”

Hansen has had an ongoing love affair with Cuba, though he’s hesitant to romanticize the struggling Caribbean nation that’s just now experiencing a glimmer of economic hope in the wake of President Barack Obama’s diplomatic initiative easing decades of restrictions in opposition to Cuba’s communist government.

“The erosion and the neglect of 60 years in Cuba has exposed the old amid the new,” he said. As a historian, “I’m interested in the sedimentary quality of Cuban life, how past and present come together in layers of social and psychological struggle, say, or in ongoing tensions over race relations.”

In 2012, Hansen told the Gazette that his first book on Cuba, “Guantánamo: An American History,” “introduced me to a new world that I’m not quite ready to give up.” Since then, he has flown back and forth to Cuba whenever his teaching schedule and busy family life permit. In the past two years, he’s been down at least 15 times.

His latest project, a biography of Cuban revolutionary leader Fidel Castro’s childhood and early days in power titled “Young Castro,” is in progress and due to Simon & Schuster next year. After the summer, Hansen will go on sabbatical to write the manuscript and sort through his research, much of it gathered at the Oficina de Asuntos Históricos del Consejo de Estado, the sanctum sanctorum of Castro archives.

Hansen calls the long days of academic research “hard, lonely, and sometimes frustrating, especially in a foreign language where I can’t really make jokes.” But it’s that which makes the creative aftermath so much sweeter.

“I get kicked out of the archive around 4 o’clock, and I just start walking,” he said.

There’s a fitting covertness to Hansen’s artistic approach in Cuba. He’s not quite a tourist and not quite a photographer, and doesn’t want to look like either, so he uses a “very good pocket camera,” he said, “a Sony RX100, the camera that real photographers take with them on trips if they can’t bring their professional equipment.”

“I don’t have any virtue as a technician,” Hansen said, “but I have the luxury of patience. My photos recapitulate what I’m writing about, only in a different way.”

Hansen’s writing is steadily earning him billing as a Cuba expert. The New York Times, the BBC, and the Voice of Russia radio recently interviewed him on the death of Naty Revuelta, one of Castro’s former lovers from the revolutionary period, and one of Hansen’s unlikely friends.

Before her death, Hansen often visited Revuelta’s home, where she gave him access to a trove of letters between her and Castro.

Hansen recently spent several days in Mexico City with Castro’s sister Enma, who shared with him, among other things, a never-before-seen check, dated March 1960, from Castro’s mother to support her son’s agricultural reform, which would later take away the family farm.

While “Guantánamo” established Hansen’s predilection for subverting accepted opinion about a person or place, “Young Castro” will go further, introducing audiences to “a Castro we haven’t met before,” he said.

“Castro was simultaneously a privileged kid and a country bumpkin, and always felt the need to prove himself. This may have been the source of the immense chip on his shoulder.”

Like his photographs, Hansen’s research is exposing not only Cuba’s stunning beauty but also its long-running turmoil. And, to his surprise, he hasn’t received much pushback.

“Cubans like ‘Young Castro,’” he said. “It comes at a time when Cuba itself is taking a hard look at what the revolution might have been.”

“Cuba From a Different Angle” runs from April 10 to May 15 at the Belmont Gallery of Art. An opening reception will be held from 6 to 8 p.m. on April 10.