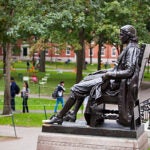 Indoors or dashing through the snow, Harvard runners were steadfast in marathon prep

New Englanders know that training for the Boston Marathon means training with the most unforgiving running partner there is: Mother Nature.

Almost 3 inches of snow on March 15 made it official: The winter of 2014-2015 was Boston’s snowiest ever, with 108.6 inches. But bitter temperatures, icy streets, and impassable sidewalks didn’t stop Harvard runners from training for the April 20 race.

“I hate running on a treadmill, so I’ll do almost anything to avoid it,” said the dean of Harvard’s Graduate School of Education, James Ryan, who is dedicating his fifth Boston Marathon to teachers. Through the winter months, Ryan trained with his wife and fellow marathoner, Katie, wearing Yaktrax on his sneakers for extra traction and cross-country skiing when “there was too much snow on the ground.”

Many Harvard runners in marathon mode turned to the University’s running community for help with their workouts.

Harvard on the Move, which sponsors weekly runs for students, staff, and faculty, added an early morning indoor run at Harvard’s Gordon Track to its regular schedule and organized runs around Fresh Pond, which was well-cleared throughout the winter. Other runners looked to the Harvard College Marathon Challenge (HCMC), a listserv that helps raise funds for charities and connects members for training runs. The resource included advice about snow-free routes and tips for running in the cold, wind, and snow.

“BE CAREFUL of monstrous falling icicles when you’re running (or walking) in the city!” read a message posted on the listserv early in the year.

“Also, BRING A CHARLIECARD OR CASH/CREDIT CARD WHENEVER YOU RUN. It’s really cold outside, so if you twist an ankle etc., then you’ll appreciate not having to worry about how to get back.”

Other HCMC emails offered updates on conditions along the Charles River, and invitations to cross-country treks or group treadmill workouts.

Prepping for her first marathon, HCMC subscriber Anna Dolan ’15 was often joined by friends on the treadmills at the Malkin Athletic Center. Logging long miles in warm company helped her make it through the cold months, she said. “It was nice to have someone there, for sure. Some camaraderie.”

Dolan, who is running to support the American Medical Athletic Association’s youth fund, also ran late at night on the treadmill in her swing housing space on Prescott Street. “I sort of learned to embrace it,” she said, “I definitely preferred running on the treadmill to the fear of rolling an ankle or something on the snow.”

Those looking to mix up their workouts or eager for a little climbing conditioning headed to Harvard Stadium to meet up with the November Project, a group of runners who regularly tackle the stadium’s concrete steps. A little snow didn’t stop them. When the weather turned ugly, they grabbed their shovels and started digging.

After one heavy storm, participants alternated running a section of cleared steps with sprints along a plowed stretch of pavement nearby. “That ended up being a pretty killer workout,” said Kelsey Taylor, a graduate student in biological-biomedical sciences, who ran with the group in preparation for her fourth marathon. “Got the heart going.”

Harvard Provost Alan Garber took to the water to prep for the race. “My body is not what it used to be,” said Garber in late March, a few days before his final long run, 22 miles along the marathon route. “I spend a lot of time running in the pool. I do that both to prevent and to recover from injury. I’m constantly balancing running outside with running in the pool, and also running on the treadmill.”

Garber took up running as a medical student years ago to get in shape for a backpacking trip with friends. Only he never stopped. For a time he was logging a 20-mile run every other week on the trails near his home in California. The scenery was beautiful, and the weather almost always ideal, he remembered, but the running was solitary.

“I enjoyed running in those conditions, but I wasn’t running with a great group of people,” he said. “At Harvard there is a terrific running community. I run with Harvard on the Move, with students and faculty friends, and the companionship makes all the difference in the world. When the running route crosses busy city streets, and the weather is less than inviting, it’s the people you run with who will motivate you to put on your shoes and head out the door.”

Running buddies will be key come Marathon Monday, especially if it warms up. As the mercury has started to rise, so have worries that a surge of heat would be even more problematic than usual, after one long surge of winter.

“I want it to warm up and be spring already,” said Taylor, “but I am hoping that will happen after April 20, since running in the cold weather is all that we know how to do.”