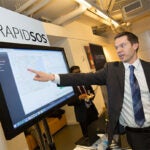 One is headed to India, another will spend a year in Poland, and the third will be in Colombia. This summer, after completing their studies at Harvard School of Engineering and Applied Sciences (SEAS), three graduating seniors will begin yearlong fellowships as part of the Fulbright Scholar program administered by the U.S. Department of State.

“It’s remarkable that a small school like ours has produced three Fulbright scholars in a single year,” said Harry R. Lewis, interim dean of Harvard’s SEAS and Gordon McKay Professor of Computer Science. He noted that another member of the SEAS class of 2015, computer science concentrator Ruth Fong, will enroll at Oxford University in the fall as a Rhodes Scholar. “They are all stunningly accomplished individuals who are destined to have real positive impact on the world. In fact, they already have.”

Joy Ming
For Joy Ming, notification from the Fulbright board has meant setting aside plans to start a job as a software engineer for Google in New York City. Instead, she’ll travel to India to work on a project that will assess the usability of a new mobile app designed to smooth the collection of maternal-health data in hospitals and clinics. She’ll be based in Bangalore but will conduct field work in rural regions across the vast subcontinent.

“I was able to see how the technology I was learning in shiny classrooms with new computers was able to help people on the ground where paper is the only thing they have; they don’t even have electricity most of the time,” Ming said. The experience inspired her to start the student-run organization Developers for Development (D4D).

“We were going to different [computer science] career fairs where people kept talking about making money, as opposed to making change. I thought, well, I’ve been to rural parts of India. I know that technology can be used to make change and I want other people to know that too.”

The club “plays a very important role on campus, in addition to all the good it does in supporting international development,” said Krzysztof Gajos, associate professor of computer science, who has served as faculty adviser to the group and also wrote a Fulbright nomination for Ming. “It provides an excellent illustration of the fact that being a computer scientist is not about sitting locked up in a cubicle. Computer science is a powerful and versatile toolkit, with which one can directly tackle meaningful, real-world problems.”

Tyreke White
When Tyreke White travels to Poland at the end of the summer, it will be the South Carolina native’s first time outside of the United States. Rather than project-based, his Fulbright year will be spent as a teaching assistant at a university, in either Warsaw or Krakow.

The assignment is a good fit for White’s long-term aspirations and effusive personality. He has served as an academic mentor at the Ed Portal, Harvard’s Allston-based partnership with the city of Boston. He also served two years as a teaching fellow for Math 21a, “Multivariable Calculus,” and Math 21b, “Linear Algebra and Differential Equations.”

“Teaching is something I’m passionate about,” he said.

White began his Harvard career as a joint astrophysics and earth and planetary sciences concentrator and did a summer internship at New York’s Museum of Natural History, but ultimately switched his concentration to applied math and EPS. Along the way, he said, “I realized that hardcore research wasn’t what I wanted to do. I wanted to do other things ― business, energy, education. I’m interested in a lot of different things.”

Amanda Reilly
Amanda Reilly ’15 has long been drawn to the intersection of math and science. Between her junior and senior years, the applied math concentrator spent the summer doing “white lab coat” research in Botswana, focusing on HIV. The experience got her interested in infectious diseases and influenced her decision to do her senior thesis on cholera.

As a Fulbright Scholar, Reilly will be based at the University of Los Andes in Bogotá, Colombia, where her task will be to help assess the efficacy of a needle-exchange program that was recently established to combat HIV among intravenous-drug-using populations. The work will involve visiting needle-exchange sites to collect data that can be used to construct a model.

Language should not present a barrier. Having grown up close to the Mexican border, and lived in Chile and Spain, the San Diego native is fluent in Spanish.

“The goal is to set up a model to describe — and possibly predict — how well the program is working,” Reilly said. “I’ll be there only 10 months, but my aim is to get a model up and running that will work for years to come. Hopefully, it will be something I can monitor when I come back to U.S., not a one-and-done.”

Emily Savage
Emily Savage ’15 will graduate this month with an AB and in August she will travel to Taiwan, where she will teach English to students at an elementary or middle school (still to be determined at press time).

Savage, who learned about her Fulbright selection from an email that arrived while she was at her part-time job at the Harvard Branch of the national nonprofit Health Leads, selected Taiwan after studying Chinese while at Harvard.

“One of my teachers was from Taiwan and I loved hearing her talk about it,” said Savage, who has visited Beijing and loved the experience. “Some of my TFs referred Taiwan as a part of China and some of them thought of it as its own country. I thought that dynamic was very interesting.”

Her Fulbright fellowship means that Savage will defer for a year starting work at Bain’s San Francisco office. Having spent the last two summers working in labs — an immunology lab at Harvard Medical School, and in Professor Conor Walsh’s Biodesign Lab where she assisted on a project to develop a robotic glove — Savage said she is “ready for something different.”

“I am interested in the business side of biotech,” she said. “I don’t want to be a doctor, but I am very interested in health care technology – figuring out how we can fix those systems. The excellent thing about engineering and why those firms [like Bain] love us is that the problem sets we do and the way we’re taught [at SEAS] allow us to solve any problem.”

Longer term, the Bethesda, Md., native has aspirations to start her own company. “I believe the health care space has a lot of improvements that need to be made. I think that is where I’ll end up.”

After the Fulbright year
So what will come after their return to American shores?

Reilly imagines two possible paths: a graduate program in infectious diseases, perhaps at the Harvard T.H. Chan School of Public Health, or medical school. Regardless of the direction she chooses, Reilly said she will pursue a career that allows her to use her quantitative skills. “I tried out the sciences and enjoyed them, but I always came back to applied math. There’s something about the numbers and the way they work that really fascinates me.”

White said that he is keeping his options open for now, hoping to use his year in Poland to zero in on a long-term plan. “I can see myself pursuing business or education, or maybe both.”

Ming too expects to sort out her true passions during her Fulbright year. “I like the fact that through my project I’ll be able to interact with the social-impact-driven as well as the knowledge-driven, so I can figure out where I fall in the scale,” she said. “I may continue on social-enterprise route,” she added, but “a Ph.D. is not out of the question.”