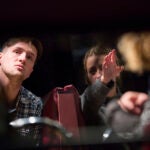 Catherine Dulac, Higgins Professor of Molecular and Cellular Biology and a Howard Hughes Medical Institute investigator, is the recipient of the 2015 Pradel Research Award. This award is presented annually to a mid-career neuroscientist whose work is making major contributions toward understanding the nervous system. Dulac plans to use the $50,000 prize to support research projects in neuroscience not typically funded through traditional sources.

A renowned expert on pheromone signaling in mammals, Dulac studies the mouse vomeronasal organ (VNO) — a tiny structure at the base of the nasal cavity that senses pheromones — to explore how brains process pheromone signals, providing insight into brain function and its impact on specific social behaviors. Dulac developed a method to identify the genes turned on in individual neurons and isolated a group of genes associated with pheromones. This led to an investigation into the role pheromones play in social interactions between the sexes. Notably, Dulac’s research overturned the belief that the neuronal pathways leading to mating begin in the VNO; rather, she discovered they begin in the olfactory system. The true function of the VNO turned out to be helping males distinguish between males and females and repressing male behaviors in female mice, and vice versa. Dulac’s research group also uncovered the neurons responsible for guiding parental behavior in both male and female mice.

Hopi Hoekstra, Alexander Agassiz Professor of Zoology and an investigator at the Howard Hughes Medical Institute, is the recipient of the 2015 Richard Lounsbery Award. The Lounsbery Award is a $50,000 prize given to young French and American scientists (administered in alternate years by the NAS and the French Academy of Sciences) to recognize extraordinary scientific achievements in biology and medicine. In addition to honoring scientific excellence, the award is intended to encourage research collaborations between the United States and France.

Hoekstra’s research identifies the precise genetic changes behind the evolutionary adaptations that have led to much of today’s biodiversity. For example, in a study of the deer mice living in the Sand Hills of Nebraska, Hoekstra uncovered the sequence of molecular events that resulted in that population evolving blonder coats than mice in the surrounding dark-soil regions. By identifying multiple camouflaging mutations in a single pigment gene, Hoekstra was able to estimate when the mutations occurred and demonstrate how they positively impacted survival rates.

Hoekstra also applies these methods to determine genetic changes affecting behaviors, leading to her identifying the various genetic regions responsible for different tunneling habits in two separate but related species of mice. This was especially significant because it was the first time the genetic basis responsible for a complex mammal behavior was revealed.

Xiaowei Zhuang, David B. Arnold Jr. Professor of Science and a Howard Hughes Medical Institute investigator, is the recipient of the 2015 NAS Award in Molecular Biology. This $25,000 award is supported by Pfizer Inc. and recognizes a recent notable discovery by a young American scientist.

Zhuang is a biophysicist recognized for her work in the development and application of advanced imaging techniques — in particular, single-molecule and super-resolution imaging methods — for biomedical research. She invented an imaging method, Stochastic Optical Reconstruction Microscopy (STORM), which overcomes the diffraction limit inherent in ordinary light microscopes. Since light microscopes’ resolution is limited both by the wavelength of the light used to illuminate an object and the opening that lets it in, conventional light microscopy is incapable of revealing the structures of objects smaller than a few hundred nanometers. STORM, however, uses photoswitchable fluorescent dyes (another of Zhuang’s discoveries) to switch on only a subset of the probes at one time so the images from the probes do not overlap, allowing their positions to be precisely determined and producing images with sub-diffraction-limit resolution. Zhuang and her colleagues have used this technology to make important biological discoveries; for example, they discovered the periodic membrane skeleton structure in the axons of neurons and elucidated the molecular structure of brain synapses.

The National Academy of Sciences is a private, nonprofit organization of the country’s leading researchers. It recognizes and promotes outstanding science through election to membership; publication in its journal, PNAS; and its awards, programs, and special activities. Through the National Research Council, the NAS provides objective, science-based advice on critical issues affecting the nation.