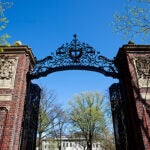 As Harvard alumni and alumnae stream into Tercentenary Theatre for the University’s 364th Commencement on May 28, award-winning author and journalist Farai Chideya ’90 will lead the charge as this year’s chief marshal.

Since 1899, the 25th reunion class of Harvard College has selected a member from its ranks to hold this distinction. The selection is based not only on the individual’s personal success, but also on his or her contributions to Harvard and society more broadly.

Chideya’s career in journalism includes work for NPR, CNN, ABC News, Newsweek, and MTV. She is the author of four nonfiction books and a novel, all of which have been used for teaching in college courses.

She describes the honor as “people saying nice things behind your back.”

“You hope that you live with integrity and that your work speaks for itself,” Chideya said. “You hope that you are the kind of person who can maintain longstanding friendships. To me, this is an affirmation of that, as it is for all the other candidates for marshal, as well as so many others in our class. It’s a complete and utter honor and sounds like a lot of fun too.”

The chief marshal’s duties include leading the alumni procession onto Tercentenary Theatre on Commencement Day and hosting a lunch for fellow alumni and alumnae that afternoon.

“What an honor to have the remarkable Farai Chideya join us as chief marshal this year,” said Harvard Alumni Association President Cynthia Torres. “This distinction recognizes Farai’s noteworthy career as a groundbreaking multimedia journalist, author, broadcaster, and commentator. In a field where guiding and educating the next generation of young people is critical, Farai’s long involvement with training and mentoring aspiring arts and culture journalists through her nonprofit work is truly exemplary. She will be an inspiring presence to our students and alumni at Commencement.”

Chideya has taught at the University of Southern California and is currently the distinguished writer in residence at New York University’s Arthur L. Carter Journalism Institute. She also served as a 2012 fellow at Harvard’s Institute of Politics, where she taught a seminar on the intersection of social media and retail politics.

She noted that “through a stroke of good luck, many of the students who served as liaisons for my class are graduating in the Class of 2015.”

Long before returning to Harvard as a fellow, Chideya found that Harvard connections ran through her career, from a network of colleagues in New York City, where she took her first job out of college at Newsweek, to numerous mentors and mentees over the years. Then there are the friendships that she fondly acknowledges have been the biggest part of her life outside of the square.

But maybe it’s simply joining in the pomp and circumstance of the day that will be the highlight. “The fact that I get to march in Tercentenary Theatre and wear a top hat is just magnificent!”

For Commencement, graduates interested in reserving tickets for the Alumni Spread Luncheon and the Annual Meeting of the Harvard Alumni Association (the Afternoon Program) can do so online.