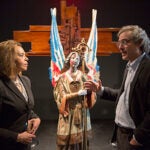 Tanner Lecturer brings sense of his own history to scholarship

In the life and work of UCLA’s Carlo Ginzburg, who will deliver Harvard’s Tanner Lectures on Human Values April 15-17, one finds intertwined layers of living history and historical study.

Ginzburg was born into a family of no small significance, not least because it included many noteworthy figures in the Italian anti-Fascist resistance. Both of his parents were of Jewish descent. His mother, Natalia (Levi), would recall her experiences as a member of this family in “Lessico famigliare” (“Family Sayings”), a book that has been translated into more than 10 languages. Carlo’s father, Leone, taught Russian literature at the University of Turin; his career ended because he refused to swear the oath of allegiance to the Fascist regime. In 1943, while directing an underground anti-Fascist newspaper in German-occupied Rome, he was imprisoned and tortured; he died in jail in February 1944. Meanwhile, Natalia and her three children, including 5-year-old Carlo, fled to the Tuscan hills, where they evaded the Nazis’ last attempt to slaughter as many Jews as possible while retreating from Allied forces.

While still a young student, Ginzburg decided that he would study history, specifically focusing on the sentiments of the persecuted during witchcraft trials under the Inquisition. His prolific work on this topic has spanned decades. His fourth book, “The Cheese and the Worms” (1976), has been translated into 24 languages and is a standard on university syllabi worldwide.

Ginzburg’s historical approach balances philological rigor and imaginative thinking. One influential method for which he is a forerunner is the microhistorical approach. A specific moment, place, individual, or group — often overlooked in grander histories — is analyzed with sharp focus. The implications of a specific case result in the construction of a new generalization.

Ginzburg has referred to his feeling when undertaking a new historical inquiry as “euphoric ignorance,” denoting the joy of encountering a puzzling fragment of information or an unknown topic. An endeavor to make sense of it then follows. He found such moments full of embedded possibilities; thus, as he has said, he deliberately chose to delve into areas with which he was personally less familiar.

Throughout his years of historical inquiry, Ginzburg has remained a part of living history, and his scholarship has continued to be informed by it. When discussing his own work, he occasionally indicates retroactive realizations on how certain political climates influenced his topical choices. Likewise, his initial choice of studying people persecuted during the witchcraft trials, he later realized, was influenced by various personal factors, including the fact that he and his family had been severely persecuted themselves.

GAZETTE: Given the occasion of your Tanner Lectures, my first question relates to the general scope of the lecture series: Do you consider that there is one (or several) overriding ethical or moral charge(s) in your study of history?

GINZBURG: A distinction should be made between ethical issues as a topic of historical research and the ethical implications of the historian’s work. Concerning the former, the general topic of my Tanner Lectures — casuistry and the controversies generated by it — has been at the center of debates about ethics for centuries, in different cultures. Even if my lectures will not address the relevance of casuistry in our world today, that relevance (especially related to bioethics) certainly provides the context in which my historical questions emerged. The ethical implications of the historian’s work are a different matter. I am fully aware of them, but I usually refrain from focusing explicitly on them, for a very simple reason: I dislike sermons, I detest preaching. The ethical side of the historian’s work must emerge from the work itself, since it is (in my view) synonymous with the search for truth, which historians must pursue. I say truth without quotation marks: The truth we are looking for is a human endeavor — fallible, revocable. That’s the reason why I insist on proofs — and disprovals. In the title of the Menahem Stern Lectures I gave in Jerusalem in 1993 — “History, Rhetoric, and Proof” — the polemical word was the last one, “proof.” But then I argued that despite the widespread perception of rhetoric and proof as mutually incompatible, proofs have been regarded as a central element of rhetoric from Aristotle, to Quintilian, to Valla — a tradition which had been ignored or tacitly dismissed by late-20th-century neo-skeptics. The ethical implications of my argument are obvious. If a contemporary neo-skeptic feels unable to refute the arguments (or pseudo-arguments) of so-called negationists who claim that the extermination of the European Jews never took place, then there must be something rotten in the historical profession. This neo-skepticism is largely out of fashion, but the need to place the search for truth (an extremely demanding task) at the center of the historian’s work is still there, and it will remain there.

GAZETTE: In your early intellectual development, what are some of your most vivid memories and/or important moments of formation?

GINZBURG: My intellectual trajectory has many roots, like anyone else’s. But working on Inquisition archival evidence has been fundamental — something I have sometimes compared to the field experience of an anthropologist. It shaped my later research in many ways, although after a few decades I started to work in different directions. I vividly remember the long days spent completely alone in the Udine Ecclesiastical Archive in the early ’60s (half a century ago, I can’t believe it) transcribing Inquisition trials nobody had seen before me — except for the inquisitors themselves. I was thrilled by what I read, thrilled by my solitude, thrilled by the encounter with a phenomenon (the benandanti) which no scholar had been aware of. Names of completely unknown peasants, men and women, emerged from those 16th-century trials — along with their dreams, their emotional reactions, and so forth. I have never since experienced something comparable in my life as a researcher.

GAZETTE: Do you consider that chapter of your life, so to speak — referring to your early archival experiences — one that is still open?

GINZBURG: Yes and no. That particular archival experience came to an end in 1989, with the publication of “Storia notturna” (translated into English as “Ecstasies: Deciphering the Witches’ Sabbath”): a book which sought to unfold, on a completely different spatial and chronological scale, the implications of my first one, “I benandanti” (translated into English as “The Night Battles”). But some of the issues I dealt with in “Ecstasies” — for instance the relationship between morphology and history — fueled much of my later work.

GAZETTE: How might you regard the subsequent chapter in your life as a researcher? One notices an increasing presence of apparently disparate nodes in cultural history in your work.

GINZBURG: What I have done since 1989 is difficult to describe: My research path may seem erratic, although I can detect a certain logic in it. Indeed, I have tried to repeat over and over the thrill of ignorance, addressing subjects I was completely unfamiliar with. First of all, I would say, it is a pleasure: I love teaching but I love learning much more. But there is probably another, more hidden, reason. I encountered my research topic, along with the books which deeply shaped my mind as a scholar, when I was in my 20s. Being precocious is not necessarily a bliss. Later I tried, more or less unconsciously, to disentangle myself from what I had become, testing what I had learned so far on new, unfamiliar topics. Casuistry was one of them. I first come across it in an essay on Machiavelli. Then Pascal came, and his opponents: the Jesuits. I will talk about both of them in my Tanner Lectures. But casuistry also required a reflection upon case studies and their implications. Once again, writing history and reflecting on the historian’s craft were inextricably connected, as they have always been since my early experiences in the Friulian archives.

GAZETTE: You have written that you were often your own greatest antagonist and that you often held objections to your work that differed from those of your critics. Is this still so? If yes, what are your greatest objections as of now?

GINZBURG: For a long time I have been fascinated by the devil’s advocate: a figure that has played a crucial role in Catholic canonization trials since the early 17th century. The topic of the Martin Buber lecture I gave in Jerusalem a few years ago was “Inner Dialogues. The Jew as Devil’s Advocate.” I feel involved in an endless, contentious conversation with the devil’s advocate. What does he say to me in these days? He says: “You are trying to tame me. You are not listening to me as you did in the past.” Maybe he is right. But self-satisfaction would be the end — a ludicrous end. I will try to do my best to avoid it.