The unheard melodies of speech 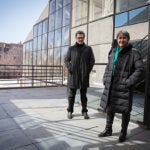 Rife with symbolism as they are, public monuments and memorials often generate controversy and elicit impassioned proposals from designers.

In a recent article on memorials in The Architectural Review, Catherine Slessor wrote, “Most war memorials are generally excruciating exercises in sentiment or bombast.” The problem, she argues, lies in architecture’s inability to fully grasp and articulate absence.

But the most successful memorials — Peter Eisenman’s rippling field of concrete slabs at the Memorial to the Murdered Jews of Europe; the subgrade scar of Maya Lin’s Vietnam Veterans Memorial; the stark driftwood frame of Peter Zumthor’s Steilneset Memorial to the Victims of the Witch Trials — manage to give shape to emptiness through poetic abstraction while acknowledging the historical and political contexts in which the events they commemorate occurred.

Composers face similar dilemmas — and criticism — in their attempts to represent absence through sound. But unlike their more durable counterparts, musical compositions offer a more temporal glimpse into the process by which the stuff of tragedy is shaped into memory.

Steve Reich’s haunting “WTC 9/11” (written during construction of the 9/11 Memorial and released on the 10th anniversary of the attacks) demonstrates the medium’s unique ability to recall not only the defining moment of loss, but the trauma that continually threatens to erase it from memory. He played the piece in its entirety to a hushed but visibly unsettled crowd during a talk at Harvard’s Graduate School of Design (GSD) on April 1.

Reich’s visit was part of an ongoing effort to bring celebrated artists from outside the traditional design disciplines to the GSD to discuss their craft. Previous masters have included pianist and composer Philip Glass, playwright and director Robert Wilson, and performance artist Marina Abramović.

“The people who work in this building deal with works of the imagination,” said Dean Mohsen Mostafavi in his introduction. “There’s a parallelism in the way Steve works — the combination of voice and music, the relationship to ambient sound, questions of duration and time — with the way architects and landscape architects think about the patterns of life and the acts of a building.”

Though Reich described the work as documentary, “WTC 9/11” feels very personal. The New York City native was not at home when the attacks on the twin towers occurred, and aspects of the piece reflect both the composer’s sense of dislocation and his parental anxiety.

Reich recalled that he and his wife had received a phone call from their son after the first attack. Their instructions were clear: “Don’t go out and don’t hang up.” Reich’s son, daughter-in-law, and granddaughter eventually joined the couple in Vermont, where the family stayed until residents of the area were allowed to return. “We got off easy,” Reich said.

Soon after, journalists began asking whether he would write something about the tragedy (1988’s “Different Trains” relies heavily on documentary material, including interviews with Holocaust survivors). Reich emphatically declined. “For [the next] seven years, I wrote instrumental and vocal music,” he said. “It’s what I had to do.”

But when a commission to write a new piece using pre-recorded voices for longtime friends and collaborators the Kronos Quartet came in 2009, the composer realized he had unfinished business.

Containing three movements, the 15-minute piece is built from dispatches of individuals affected by 9/11 accompanied by three string quartets (two recorded; one live). Throughout the work, Reich employs a compositional technique he calls “stop-action sound,” in which the last vowel or consonant of each spoken phrase is elongated. “This carries the end of the thought of one speaker into the next and connects them harmonically,” he said.

The relentlessly dissonant piece begins and ends with the first violin doubling the shrill, rhythmic warning of a landline that’s been left off the hook. It’s a chilling reminder of the major role cellphones played during the attacks and of the many communication failures.

The first movement is taut and intense, combining ambient sound with the distorted voices of air traffic controllers, first responders, and emergency dispatchers from the morning of 9/11. The second movement contains interviews conducted with Reich’s friends and neighbors in 2010. Their recollections — from the mundane “I was taking my kids to school” to the harrowing “The ground was shaking” — suggest the flashbulb memories we all have of where-were-you moments in our collective history.

The third movement delves into more metaphysical terrain, featuring recordings by two women from Yeshiva University who recited psalms over the dead at the medical examiners office. The Jewish ritual was performed in shifts around the clock for seven months. The women’s voices are interlaced with Hebrew verses chanted by a cellist (who had sat Shmira elsewhere) and a cantor from a New York City synagogue.

Spending 15 minutes in a packed auditorium listening to pre-recorded music could feel like an eternity. But the piece has a way of distorting time. Some moments propel the listener forward, like the staccato cello mirroring a frantic dispatcher’s refrain, “No contact / No contact with the pilot / No contact with the pilot whatsoever”; others, like the sudden silence at the end of the first movement, stop you in your tracks. Still others transport you to another time and place, like the sing-song recollections of neighbors or the drawn-out verses of Jewish liturgy lapping over one another like waves.

Though the voices have been manipulated, the words remain attached to the people who said them, giving the piece a rawness that immediately puts the listener on edge. But Reich’s agenda is not purely documentary. By rendering the cadences of speech in strings, he manages to translate the material reality of 9/11 into something like pure artistic expression.

This is the cosmic beauty of Steve Reich’s music. Like those first startling images of our galaxy from space, Reich’s work has a way of collapsing time, enabling us to challenge our perceptions of the past and expand our understanding of history.

Providing neither scripted experience nor cathartic release, “WTC 9/11” adds new elements to the vocabulary of abstraction. Like Eisenman’s endless repetition of forms, Reich’s looping speech melodies hint at the scale of the tragedy they’re commemorating. And his intervention suggests new typologies of sound that may allow us to confront our collective memory in novel ways.

Of course, listeners will bring their own experiences and interpretations to bear on “WTC 9/11,” which is exactly as Reich wants it. “If I wanted to give you a message,” quipped the 78-year-old composer, “I’d email you.”