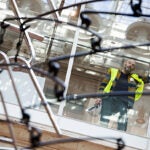 In the mind’s ear

Symposium will explore University’s rich collections, and how they augment learning

American universities increasingly use their rich collections as important teaching tools, delving into their art museums, libraries, archives, and even arboretums to unlock and explore aspects of knowledge. On Friday, scholars from across Harvard will convene at the Radcliffe Institute for Advanced Study for a symposium called “University as Collector.” Experts will discuss how a wide range of Harvard’s holdings, including scientific instruments and University portraits, help to advance Harvard’s mission. To learn more about the symposium, the Gazette spoke with an organizer, Yukio Lippit, the Johnson-Kulukundis Family Faculty Director of the Arts for Radcliffe’s Academic Ventures program, and professor of history of art and architecture.

GAZETTE: How did you come up with the idea for a conference that explores Harvard’s collections?

LIPPIT: The symposium grew out of a project initiated by my co-organizer, Julie Buckler, who is director of the humanities in the Academic Ventures program at the Radcliffe Institute, on cultural memory. It goes without saying that cultural memory can be preserved, inherited, conditioned, questioned, or even obscured and effaced through the transmission of objects and collections. Julie and I were struck by the degree to which universities seemed to be compelling sites to explore from this perspective. Not only are universities places where research is carried out, knowledge generated and passed on, and students trained, but they are also spaces where things accumulate — lots of things. Books are an obvious place to begin, but university objects are not limited to books. Other kinds of objects also accrue, sometimes purchased, at other times donated, sometimes purposefully, at other times accidentally or serendipitously. Sometimes they are just forgotten or neglected and left around. And while many of these objects are eventually gathered into and acknowledged as collections, in some cases they are simply assemblages of things that have sedimented over time.

Harvard is no exception. Recognizing that we work in a particularly rich artifactual environment, Julie and I wanted to organize a symposium that examined these collected and accumulated objects in the University, in libraries, museums, and elsewhere, and bring them into dialogue. We wanted to understand what kinds of insights they yielded about the University through their specific trajectories, and how they have been activated on behalf of knowledge at Harvard and beyond. It was this set of questions that led to “University as Collector.” Unfortunately, we could only include a very small number of speakers and examine a limited array of objects and collections. It would be possible to organize a similar symposium every year and have each time an entirely different roster of participants, and address a dramatically different range of things.

GAZETTE: Why is teaching with objects important?

LIPPIT: I am an art historian and regularly teach with objects. Oftentimes the genesis of the research vectors I pursue can be traced back to these artworks. Much of my research and teaching is organized around the idea of moving outward in ever-larger concentric circles from an art object toward cultural history. Increasingly, object-centered teaching is being embraced across the disciplines, and with the materialist turn in the humanities, scholars are increasingly interested in more than the use of objects as narrative devices for the telling of history. They are finding new ways to understand how materials and processes of making generate knowledge in ways that differ from the study of texts.

GAZETTE: What is the significance of having more and more of Harvard’s rich collections increasingly available online?

LIPPIT: One of the interesting things about the digital age is that it sets in higher relief the importance of objects-based learning. There is nothing like the visceral experience of a direct encounter with an object, nothing like the ability to share the same space with it, understand its scale, engage it with one’s own senses. This experience generates new kinds of understanding and gives rise to different questions and different modes of discussion. Having Harvard’s collections available online is valuable because it enables such encounters.

GAZETTE: In putting this symposium together, did you come across any collections that surprised you?

LIPPIT: Well, there are all kinds of quirky and unusual things at Harvard, such as the antique clocks in University Hall and other administrative buildings. These were tremendously interesting to learn about. But equally surprising to us were the ways in which assemblages of things at Harvard really came to life, or could be viewed through an entirely new lens, once the term collection was applied to them. This pertains to everything from the buildings on campus to the portraits scattered throughout the University, and the trees in the Arboretum.

GAZETTE: What other insights are you hoping to gain from this conference?

LIPPIT: One of the interesting things I would like to better understand is how institutions like universities transmit knowledge and memory in intangible as well as tangible ways. Sometimes this is in the form of practices that are embodied but not necessarily manifest in the form of material objects. So I am also interested in the stories and insights that objects do not tell about the University and what the limitations of this approach are. This, for me, is what scholarly inquiry is all about. We are not just here to celebrate, but to understand.