The road trip of a lifetime 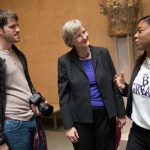 A college vision, made real

Scholars from Mott Hall Bridges Academy in Brooklyn, N.Y., were thrust in the spotlight when photographer Brandon Stanton, the founder of the popular blog “Humans of New York,” featured eighth-grader Vidal Chastanet describing his admiration for principal Nadia Lopez. The post went viral and a fundraiser was launched to bring the students on a tour of Harvard.

The students arrived on the Harvard campus Thursday for a slate of activities built for them. In coordination with Harvard College Admissions and Financial Aid and Project TEACH, an early college-awareness program at Harvard that demystifies higher education and advocates that it is an affordable and attainable aspiration, the scholars got a sense of what college life is really like, exploring hands-on learning activities across campus, from the American Repertory Theater to the Harvard Museum of Natural History.