At the heart of ‘Mad Men’ 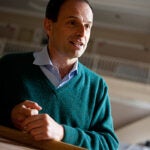 Matthew Weiner is a talker. He admits it. In answering questions — about his writing process, about the hit AMC drama he created, “Mad Men,” which will end its seven-season run next month — his mind meanders away from simple truths, often to a story and a place in the past where the writer and director felt shunned and downtrodden, not unlike his show’s protagonist, Don Draper.

Like Draper, Weiner struggled to build the life he wanted. He once stopped writing altogether because he found it impossible to break into show business. Finally he landed gigs writing for sitcoms. It was during that time that Weiner had an idea, a story about a man from meager beginnings who lands it all — success, looks, women — and in despite of it, is miserable.

“‘Is this it?’ and ‘What’s wrong with me?’ These two questions are at the heart of the show,” Weiner told a Harvard audience Monday at Sever Hall.

Fans preoccupied with the approaching finale were offered no clues on Draper’s fate during a conversation between Weiner and Bret Anthony Johnston, the director of creative writing at Harvard. The event was the keynote in Harvard LITFest, a week of workshops and talks now in its second year.

Instead of focusing on the end of the series, Weiner talked stories — the events that shape us, whether we realize it or not, and the necessity of persistence in life and in art.

Weiner’s pilot script earned him the attention of “Sopranos” writer and producer David Chase, who cleared a space on his writing team for Weiner. After “The Sopranos” ended in 2007, Weiner began shopping his period piece around. It was nabbed by AMC, a network that had never delved into original programming. Before too long “Mad Men” had gained a passionate following.

Weiner said that he’s driven by mortality and finds himself always scripting “some version of ‘Rip Van Winkle’ … someone does something they shouldn’t have done and they’ve missed their whole life,” he said.

He admitted he has occasionally weaved in tidbits from his own life. While working on “Signal 30,” an episode from Season 5 that included a fight between Pete Campbell and Lane Pryce, Weiner was “the most depressed I’d ever been in my life.

“I don’t know what it was: the permanence of time passing, success, my relationship,” he said.

The characters fell victim to the same unnamable malaise.

“It’s a cliché. Suburban woe. Middle-age crisis. Frustrated art. Waning sexual powers,” Weiner said. “But to have a third person express it … I hope it means something to other people.”

The episode also featured something unique: a poem, written by the character Ken Cosgrove. Weiner did his college thesis in poetry, and said he was crushed when a professor he let read it ripped it to shreds. But for all the heartbreak and rejection that comes with the territory, Weiner said, it’s essential that the developing writer take heart in compliments and words of encouragement and keep going.

“I want to be known as someone who takes a lot of risks,” he said. “Writing-wise I’m constantly at war … I’m embarrassed to repeat myself unless I feel it’s a thematic underscoring. There’s a lot of stuff and it’s like, ‘Will that work?’ Well, we’ll see.”

Dispelling the idea that he’s the show’s main author, calling it “some commercial construction,” Weiner spoke often about having a team of writers, “which creates safety.”

True writers, he said, will endure that doubt and fear and move past it — because they have to.

But to be a writer is to be a good observer, said Weiner, and an even better listener. “People ask me what I’m doing next and I say that I’m returning to my first love — eavesdropping.”