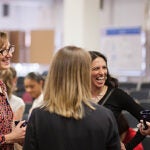 Nobel laureate Schmidt, who’ll deliver Loeb and Lee lectures, will discuss rapid expansion he helped to prove, and what’s next

In 1998, a team led by a former Harvard graduate student shocked the astrophysics world by publishing results that said the expansion of the universe, believed to be gradually slowing, was instead accelerating.

The ramifications of the finding, by the High-Z Supernova Search Team led by Brian Schmidt, continue today, as astronomers search for the mysterious dark energy fueling the expansion. Schmidt, together with another Harvard Ph.D. from the team, Adam Riess, and the leader of a second team doing similar work, Saul Perlmutter, received the 2011 Nobel Prize in physics for the discovery.

Schmidt, now a distinguished professor at the Australian National University, is on campus this week to deliver the 2015 Morris Loeb and David M. Lee Lectures in Physics. He spoke to the Gazette about that seminal discovery, his Harvard days, and what he sees as being most exciting in physics today.

GAZETTE: It seems our understanding of the universe has changed dramatically over the past few decades. How has your view of the universe changed since you first began thinking about it in a serious way?

We knew … there were many, many possible things it could have done in the past and would do in the future. Now we’ve got its vital statistics nailed, to a few percent, and so it’s been quite a transformation, going from, “We know there’s a universe that’s expanding,” to really knowing a huge amount of detail about the universe.

GAZETTE: Clearly your own work has been key to that new understanding. Can you tell me about the moment you realized that the universe was expanding at an accelerating rate?

SCHMIDT: That’s a tough question, because there wasn’t one real moment when I realized our data honestly said it was accelerating. I first started talking to Adam Riess, co-winner of the Nobel Prize, on the phone. He had sent me a plot. I was looking at it, and he was looking at it, and we were thinking, “This can’t possibly be right.”

Three months later, after checking everything, I go, “Gee, it’s still there, we have to tell everyone else.” We told everyone else, and they said, “This can’t possibly be right …”

So it was a fairly long, drawn-out process. Then, once we did publish, we knew what our data said. [But] even then, we had eliminated — in the words of Donald Rumsfeld — the “known unknowns.” But there are always the “unknown unknowns,” and so [there’s] a worry in the back of your head that something’s going to pop up that no one had thought of.

And that persisted for me until about May of 2000, when a very important cosmic microwave background experiment, or two of them, released their results. And suddenly, we went from being 99.99 percent sure to being 99.9999999 percent sure. I … saw that and said to my wife, “I’ll be damned, we’re right.”

GAZETTE: Did you have a favorite proposed result before it came out, and was this it?

Having it speeding up sort of made sense, even if it was crazy because you had to invent 70 percent of the universe. So I think that, in the end, it makes perfect sense given what we knew back then. It’s just normally in science you’re not allowed to add some brand-new form of matter to the universe and have it actually be the dominant form.

GAZETTE: And the big thing was completely unknown …

SCHMIDT: That’s right. Einstein had invented it, but it’s one thing to invent things — theorists invent things all the time, millions of things have been invented — but to actually have one of them be right, that is pretty rare.

GAZETTE: Where is that work now? Is it essentially the search for dark energy, or are there other things beyond that? Are you continuing to work on it?

SCHMIDT: This is something I continue to work on, not with all of my time but with part of my time. But it’s such a big problem, it’s important to keep looking. The question comes down to: Was Einstein’s version of dark energy — the stuff he called the cosmological constant — just an inherent feature of space? Is that right, or is it something else? Thus far, every observation we’ve made says that Einstein, as usual, was right on. But we keep looking.

GAZETTE: What role did Harvard play in that discovery?

SCHMIDT: Harvard is where I did my Ph.D., and I had a phenomenally good experience at Harvard, one of the best times of my life — arguably the best time of my life. I had a great supervisor who’s still there, Bob Kirshner, and you know I learned a lot, not just from Bob, but the whole faculty and everyone else who was at the Center for Astrophysics.

Among those was another of Bob’s students, Adam Riess, who was a few years behind me. I was sort of his academic big brother, so to speak. At the end of 1993, I finished my Ph.D. and I started a postdoctoral fellowship at the Smithsonian side of the Harvard-Smithsonian Center for Astrophysics. So I had a different employer and I changed offices. I moved like four offices down the hall, and that allowed me to keep on doing and thinking with this amazing cohort of people.

In March or April, 1994, a group of people I had worked with as part of my Ph.D. thesis from Chile — Nick Suntzeff, Mario Hamuy, Mark Phillips, Jose Maza, these four — came up and showed us their latest results using type 1a supernovae.

I knew this was a reasonable possibility, but they showed us they could do remarkably accurate distances. And I had been doing distances for my Ph.D. thesis with a different type of exploding star. Their method was different from mine, but it was just much, much more accurate, and the objects were much, much brighter, which suddenly meant we had a tool that was accurate and that gave us the ability — with modern technology that was just emerging in 1994 — to observe objects 5 or 6 billion years back in the past. That just was a quantum leap in capability.

I had at this point gotten a job in Australia [at Australian National University]. I hadn’t moved yet.

GAZETTE: So then members of the High-Z team continued to collaborate from all over, and you were kind the central hub at ANU?

SCHMIDT: It was really a very flat organization of 20 people. The senior people allowed me to be chief organizer, and they allowed the young people in the project to really take leadership roles, and that’s kind of an unusual thing for them to have done. I think that was one of the secrets of our success. I was 27 years old, and I was leading a team on which Adam Riess was the only person younger than me.

GAZETTE: What do you think is the most interesting field in astronomy today? Is there a particular area you tell students: This is where you should go?

SCHMIDT: The two main things I see happening right now that are incredibly exciting — obviously exoplanets, there’s a very strong group there at the CfA doing that. One of my graduate students will be showing up at the CfA taking up the same position I had back in 1994 in the next few months. We’re literally going to be able to start characterizing the atmospheres of exoplanets in the next few years. And that’s about as exciting as it gets.

Another thing we’ll be able to do with modern technology is look back to the dawning of the universe, when the first stars and galaxies formed. Being able to see how the universe was when it was actually born, not when it was hot and kind of looked like the sun, which is when it looked like the cosmic microwave background, but really when the first stars and galaxies formed. That’s another area I think is really going to open up within the next decade.

GAZETTE: Is there a single takeaway, one thing you’d like people to walk away with after they listen to your three talks this week?

SCHMIDT: A number of things. First of all, astronomy is still a really exciting area of physics to be involved with. There’s a lot happening.

Being able to be at Harvard, for me, as a student and a postdoc, was absolutely critical. It was a great experience. I think it’s important for people there to realize how good it is, and to realize that most people don’t get to hang around Harvard the rest of their life. There is life outside of Harvard, and one of the great things about Harvard is it gives you the skills to build up great careers all across the world and is incredibly nurturing in allowing you to come back and share and learn throughout your career.