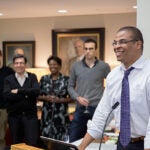 Research will take GSAS's Fulbright Fellows around the world

The Buddhist response to Western science and religion. The changing dynamics of identity in China under the Qing dynasty. The experiences of Muslims who participate in interfaith organizations. These are three of seven projects that will be undertaken abroad by students from Harvard’s Graduate School of Arts and Sciences (GSAS), thanks to Fulbright Fellowships awarded earlier this week. The students’ research will take them across the globe — to Africa, Asia, and Europe.

“Once again, GSAS has an impressive showing among Fulbright Fellowship recipients,” said Xiao-Li Meng, dean of the Graduate School of Arts and Sciences and the Whipple V.N. Jones Professor of Statistics. “The awards highlight the tremendous talent of our student population and the potential they hold to form a new generation of scholars and problem-solvers who will make contributions in whatever career paths they may take.”

Steffani Bennett, a Ph.D. candidate in the history of art and architecture, will travel to Japan to access resources connected with the 15th-century artist Sesshū Tōyō. Bennett believes that Sesshū’s travel to Ming-dynasty China profoundly influenced his artistic practice, which helped transform painting of the period and beyond.

A Ph.D. candidate in East Asian languages and civilizations, Ernest Brewster studies the Ming dynasty, particularly from 1368 to 1644, when Buddhism underwent a radical transformation in response to Western science and religion. During his time in China, Brewster will document how Buddhist scholars of this era drew from Buddhist logic and epistemology to defend and strengthen their faith.

Deirdre DeBruyn Rubio, a Ph.D. candidate in the study of religion, is examining the Muslim experience in Paris- and Boston-based interfaith organizations. By conducting research in France, she hopes to elucidate how the ideal of accepting religious differences works in practice when some religious traditions are seen as incompatible with secular democracy or citizenship.

Logan Heiman is a master’s student in Middle Eastern studies. A scholar of the Turkish language, Heiman will take up an English teaching assistantship as a way of gaining vital experience while immersing himself in the culture of Turkey prior to commencing Ph.D. studies in political science.

Neelam Khoja, a Ph.D. candidate in Near Eastern languages and civilizations, will go to India. Khoja intends to further her research on how writers of Punjabi histories in the late Mughal and Colonial period negotiated the conflicting demands of their patrons and historical fact in a context of extreme political instability.

A Ph.D. candidate in East Asian languages and civilizations, David Porter investigates the changing dynamics of identity in China during the Qing dynasty, with an emphasis on the core military organization and social welfare system known as the Eight Banners, which carried privileged status and power. During his time in China, Porter will focus on the Han Chinese in the banner system, of particular interest because of their hybrid identity.

Kimberly Wortmann, a Ph.D. candidate in the study of religion, heads to Tanzania to examine the Ibadhi Muslim minority community of Zanzibar and how it has adopted an increasingly inclusive attitude toward other Muslims since the 1980s, while renewing a sense of Ibadhi identity. Wortmann argues that this period witnessed significant improvement in the social and political status of the Ibadhis, which once ruled over a predominantly Sunni African population until they were overthrown in 1964.