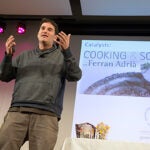 Four of the teams that took part in a hackathon at the MIT Media Lab last weekend will go on to present their practical solutions for reducing institutional corruption to a conference at Harvard Law School later this spring.

“You did an extraordinary amount of work and solved an extraordinary amount of problems since Friday,” said Bill English, research director for the Edmond J. Safra Center for Ethics. The hackathon was organized by center and the MIT Center for Civic Media with the goal of turning academic ideas into tangible solutions to problems that lead institutions astray from their original missions.

A team called Unearth won the competition, second place went to WeCott, and CampaignCon and Open Think Tank tied for third. The teams of volunteers ― who included students, retirees, members of the government, legal, and medical communities ― varied in size from two to about 20 people.

Scholars, researchers, news reporters, and activists have contributed to the Safra Center’s five-year project under the direction of Lawrence Lessig, studying, mapping, and looking for solutions to the institutional corruption that takes place in all corners of the globe. The project will culminate with a two-day conference, “Ending Institutional Corruption,” at Harvard Law School in May. Judges initially planned to let top three teams present their proposals at the conference, but the ideas were so strong that the organizers decided to let all four teams give at least an abbreviated report.

“Part of our effort is to take research from the ivory tower and take it to the real world and have an impact,” English said. “Talking to my colleagues, they have been blown away by how productive these 2½ days have been.”

Participants started the weekend brainstorming ideas, then broke into groups to work on solutions, said Heidi H. Carrell, coordinator for the Lab at the MIT Center. “We want real, usable tools that will have an impact,” Carrell said. “That’s part of the judging criteria.”

Projects addressed issues in government and law; medicine and public health; finance and economics; or nonprofits and academia. Teams within each category worked on their own solutions.

In the medicine and public health field, Christopher Robertson’s Unearth team developed an easy way to show doctors — who often look more critically at a report if they know it was funded by a pharmaceutical company — how research studies for new pharmaceuticals are funded. Research projects bankrolled by the National Institutes of Health or independent sources can be expected to be more objective in their conclusions than industry-funded studies, he said, but funding sources and information on whether an author received additional pay from a company can be buried in fine print. Unearth’s program is already available through the Chrome store and can easily be downloaded by doctors and hospital.

WeCott created a social platform to help the public boycotts businesses indulging in unfair pricing, poor worker treatment, or other questionable practices. “One of the tools we have to fight corporate corruption is boycotting,” said team member Joseph Schiavone. “But there are certain barriers to boycotting to keep it from being a widely used tool,” including lack of awareness that a problem exists, and not seeing results from a boycott. WeCott’s website shows which companies the public is boycotting, and why.

Paul Jorgensen’s CampaignCon focused on tracking federal campaign finance data so the public can see how corporations donate to politicians through a web of private contributions, corporations, and political action committees. The service retrieves weekly updates from FEC reporting and looks for shifts in donations.

Brooke Williams led team Open Think Tank, which worked on the website thinktankdonors.org and an app that searches for and explains foreign governments’ donations to nonprofit and academic think tanks.

The hackathon was the brainchild of Williams, an investigative reporter who is now a fellow at public narrative at Harvard.

“The best way to help my colleagues was to organize a hackathon where we could bring technologists — and not just technologists but those who want to make a difference — together with amazing thinkers,” Williams said.