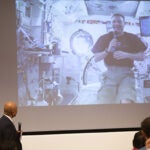 Higher than the sky

Lecturer says such a movement could help free ‘all other groups’

A successful bisexual movement would lead not only to more freedom for bisexuals, but to “liberation of all other groups. In fighting for its goals, it would not forget how all forms of oppression are interlinked. It would not seek to assimilate, but rather to multiply and expand,” said Shiri Eisner, author of “Bi: Notes for a Bisexual Revolution,” in delivering the annual Nicholas Papadopoulos Lecture.

“The choice of this year’s lecturer reflects the Office of BGLTQ Student Life’s commitment to bisexual students at Harvard, and to recognizing the full diversity of the queer community,” said Joshua Blecher-Cohen ’16, senior intern in the Harvard College Office of BGLTQ Student Life, which presented Tuesday’s lecture. “Too often, bisexuality is marginalized within the world at large, and within LGBT communities as well. It was incredibly validating to see Shiri’s lecture locate bisexuality at the heart of queerness rather than at its periphery.”

Eisner said that society is afraid of bisexuality because many people think bi people are really gay or can choose to be either gay or straight, are confused or going through a phase, are promiscuous, or are carriers of sexual diseases.

During her lecture, named for a Harvard graduate who died of AIDS in 1994, Eisner called for a bisexual revolution that would combat “biphobia and monosexism, resist all hierarchical binaries of sex, gender, and sexuality, and a struggle for the liberation of all bi, trans, and queer people, and resistance to all oppressive hierarchies, including race, class, age, ability, and any other oppressive axis that constructs and influences people’s lives.

“In concocting a bisexual revolution,” Eisner said, “what I’d like to do is to mix bisexuality together with intersectionality and radical politics. I imagine it as a bubbling potion which, after being added to those other components, creates an explosion of fire and light and gas, burning and bursting in all directions. It is this explosion that I want to concoct, this burst of creativity, power, and something of the unknown — to make bisexuality into an agent of chaos so that we can use it to destroy oppression and create something new.”