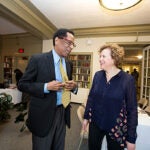 An inspiration to students

Geophysicist taught at Harvard for more than four decades

Harvard’s Professor of Geophysics Richard “Rick” John O’Connell died on April 2 after a valiant, three-year battle with prostate cancer during which he never sacrificed his humor or his positive outlook.

Born in Helena, Mont., O’Connell attended CalTech. Working alongside adviser Gerald J. Wasserburg, he earned a bachelor of science degree in physics, a master of science degree in geology, and a Ph.D. in geophysics. Following postdoctoral work at the University of California, Los Angeles, and CalTech, O’Connell joined the Harvard faculty as an assistant professor of geology in 1971, was promoted to associate professor in 1974, and became a tenured professor of geophysics in 1977. He had been an associate of Lowell House since 1983.

In addition to his own work, he was best known for the degree to which, over the course of his career, he attracted and mentored his students, graduate students, and students of students who went on to become university deans, teachers, and leaders in the scientific and academic worlds.

O’Connell was a significant figure in building a scientific community of geophysicists. In both his own and collaborative research he was awarded some of geophysics’ highest awards: the Inge Lehmann Medal of the American Geophysical Union, the Arthur L. Day Medal of the Geological Society of America, and the Augustus Love Medal of the European Geosciences Union.

He was known for telling a good story, enjoying a good meal, particularly after a fine glass of single-malt scotch (no ice and neat, please), and for his love of Whisper, the Alden yawl he and his wife, Susan Playfair, sailed together out of Quissett Harbor in Falmouth, Mass.

In addition to his wife, he leaves his son, Brian O’Connell of Houston; his step-daughter, Lily Faulhaber of Paris; a sister, Pat Anderson of Wolf Creek, Mont.; a niece, Shannon Trimboli of Boise, Idaho; and a nephew, Ian Anderson of Wolf Creek, Mont. He also leaves a stepson by marriage, Tom Faulhaber and his family in San Francisco. His twin brothers, Michael and Tom, both predeceased him.