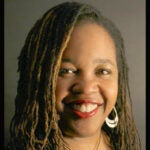 Actress and Harvard alumna will address College seniors in May

Academy Award-winning actress Natalie Portman ’03 has been selected as the 2015 Class Day speaker for Harvard College. Portman will address the graduating class on May 27, the day before the 364th Commencement.

“We are honored to welcome Natalie Portman back to Harvard as our Class Day speaker,” said Class Marshal Megan Prasad ’15, co-chair of the selection committee. “From ‘Black Swan’ to her research in psychology to her work on microfinance initiatives, Portman is not only an inspiring actress but also a committed intellectual and humanitarian. We hope she will share her diverse experiences, both at Harvard and beyond.”

Portman has acted in more than 35 feature films, including 11 before she graduated from the College. She won an Oscar for best actress in 2010 for her leading role in “Black Swan.” Most recently, Portman wrote, directed, and acted in “A Tale of Love and Darkness,” which will premiere at this year’s Cannes Film Festival. She has been involved with a number of philanthropic causes, serving as an ambassador of hope for FINCA, a microfinance nonprofit, and as an ambassador for Free The Children.

The process of selecting Portman began with a survey of the senior class last fall. A subcommittee of the eight class marshals considers speaker suggestions and extends the invitation.

“Through the wide array of her achievements both on and off the screen, Natalie Portman has left an imprint on our cultural consciousness,” said Class Marshal Bob Wu ’15, co-chair of the selection committee. “And as an alumna of the College, she’s uniquely positioned to help us reflect on our experiences over the past four years. We can’t wait to host her later this spring.”

The tradition of the senior class inviting a guest speaker to address graduates on Class Day began in 1968. Previously, the honor was given to University affiliates, such as deans, faculty, or classmates. The first invited guest was civil rights leader Martin Luther King Jr., who accepted the invitation shortly before his assassination. His wife, Coretta Scott King, delivered the speech in his absence and became the first woman to give a Class Day address at Harvard.

“Class Day is a moment to celebrate our graduating class and appreciate the community we’ve all built over the past several years at Harvard,” said First Class Marshal Sietse Goffard ’15. “Our goal is to bring every senior together one last time before Commencement to enjoy a day just for us, and we’re looking forward to an especially exciting Class Day this year.”

In addition to Portman’s address, Class Day events include award presentations and student orations. The day’s events will take place in Tercentenary Theatre in Harvard Yard beginning at 2 p.m.