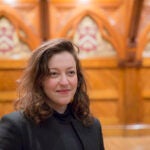 Walking tour highlights the sights and sounds of literary Harvard

April is National Poetry Month, though at Harvard every month could be. The University’s poetic legacy dates back hundreds of years and has helped shape the world’s literary canon. E.E. Cummings, John Ashbery, and Wallace Stevens are among the University’s well-known poetic alumni, while Maxine Kumin and Adrienne Rich attended Radcliffe.

Today, contemporary poets like Kevin Young ’92 and Pulitzer Prize-winning Tracy K. Smith ’94 are building on the tradition before them, and who knows how many poets-in-waiting are in Harvard’s classes right now, verses just simmering.

Lauded poet Jorie Graham serves as Harvard’s Boylston Professor, and the University’s literati also include poet and critic Stephen Burt and literary critic Helen Vendler, to name only a few. But poets are found outside of the English Department, too, as with the Medical School’s Rafael Campo — an internist at Beth Israel Deaconess Medical Center and the author of several award-winning collections of poetry.

The Gazette invites you to explore Harvard by foot and ear. This walking tour of campus can be completed in a lunch hour or less, and pairs classic Harvard landmarks with a sampling of the poets connected to the University. Using recordings housed at the Woodberry Poetry Room as well as new recordings, the tour also commemorates the April 13 birth of Seamus Heaney, a Nobel Prize winner and Harvard’s one-time Boylston Professor and poet-in-residence. Heaney died on Aug. 30, 2013, but his mark on Harvard is indelible. 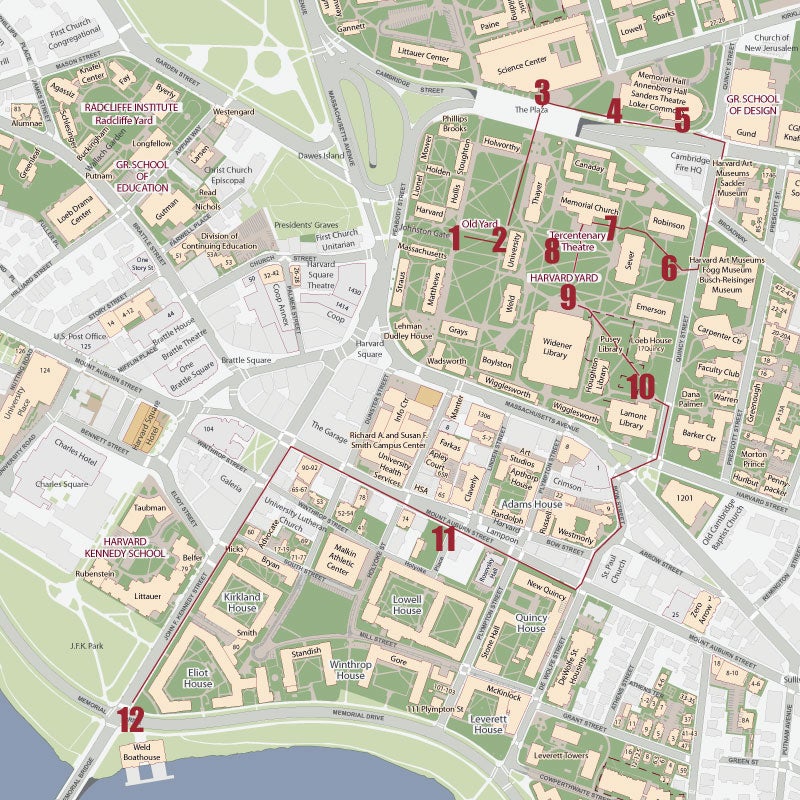 Welcome to the Harvard Poetry Walking Tour. This tour will lead you through campus by foot and ear, pairing classic Harvard landmarks with just a sampling of poets connected to the University. To begin this tour, you should be standing in the Old Yard, which is home to most freshman dormitories. Now listen to Pulitzer Prize-winning Harvard alumna Tracy K. Smith read her poem “The Universe as Primal Scream.”

Annenberg Hall, located in the basement of Memorial Hall, serves as the dining facility for first-year students. Harvard University Dining Services serves approximately 3,400 meals here each day. Listen to T.S. Eliot’s “Morning at the Window,” which was recorded in Sanders Theatre on May 13, 1947, as a Morris Gray poetry reading.

In the Sever Hall courtyard, pick a tree, any tree, and listen to Adrienne Rich read her poem “The Trees,” which she recorded at the Woodberry Poetry Room on May 10, 1961.

Facing Tercentenary Theatre, where Commencement is held outdoors every year, listen to the late Seamus Heaney read “Villanelle for an Anniversary,” which he composed in honor of Harvard’s 350th anniversary.

Lowell House is home of the Lowell House bell tower, and where Robert Lowell once lived. The House itself is named after former Harvard President A. Lawrence Lowell, an ancestor of the poet. While living in the House, Lowell caused a scandal by dating an older woman named Anne Dick, of whom his parents disapproved; so much so, in fact, that they wrote Dick’s parents forbidding her from visiting their son’s dorm room “without proper chaperonage.” Hear Professor of English and poet Stephen Burt read Lowell’s poem about this incident.

After reaching the Weld Boathouse on the Charles River, hear physician, poet, and Harvard Medical School Associate Professor Rafael Campo read his poem “Song in the Off Season.”