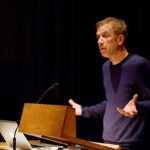 Crossing Asia to the Mediterranean Sea, the Silk Road was once a vital route for trade. Named for the Chinese silks its merchants transported to the West, the road — really a mix of intertwining routes — also carried other goods, as well as languages, religions, and philosophies, making the world, if not smaller, then at least more comprehensible, centuries before today’s instantaneous communications.

No wonder, then, that in 1998 when the cellist Yo-Yo Ma wanted to bring together musicians from around the world, he named the project after this route, forming a nonprofit that two years later spawned the Silk Road Ensemble. And no wonder, then, that musicians from the ensemble fit so neatly into the Navigation Lecture Series at Radcliffe, for a panel discussion on “Cultural Navigation: Finding One’s Way Across Traditions,” part of the Academic Ventures program of the Radcliffe Institute for Advanced Study, held in Fay House on Monday.

The panel included four Silk Road Ensemble musicians: Cristina Pato (bagpipe), Sandeep Das (tabla), Joseph Gramley (percussion), and Hadi Eldebek (oud). John Huth, the Donner Professor of Science in the Faculty of Arts and Sciences and co-director of Academic Ventures, introduced them and noted, “Marvelous things emerge when you travel with an instrument to a new land.”

Still, said moderator Steve Seidel, director of the Arts in Education program at the Harvard Graduate School of Education, “The idea of being part of a science series was not an immediately obvious thing to us.” Only when the group realized that it was actually practicing “navigation across cultures” did the theme make sense.

It has been a wild journey. In a brief video of the group in performance, bagpipe traded off with flute, while a classical Western string quartet played along with African-style percussion. The music had a strong rhythmic pulse, with solos punctuating ensemble sections. In brief, it swung, despite the fact that, as Gramley noted, “This was the first time that those 12 instruments had played a concert together.”

The piece was one of Eldebeck’s contributions, “Shirak,” a folkloric Lebanese-Armenian composition, arranged for the ensemble. The panel discussed the path to the performance as a way of explaining the challenges faced by the ensemble.

To arrange the piece, said Eldebeck, he first had to learn about instruments and styles of playing that were foreign to him. Giving an example, he said, “I communicated with Christina. I said I wanted to include her instrument, and I asked how the instrument is played, culturally — what is the context. It shaped my understanding.”

In return, Pato had to analyze and describe her instrument, including its limitations. The bagpipe, she said, is invariably loud, which made rehearsing difficult. “If I play,” she said, “they cannot hear each other. And that to me is a lesson. The way we each one of us work in our own independent life is very different from how we work in this ensemble.”

The challenge for the musicians came not only from playing along with unfamiliar instruments, but also from working with others from wildly disparate disciplines.

It was a conflict that some of the members of the ensemble were able to understand. “I grew up in both traditions,” explained Pato, who also plays piano. “As a classical pianist, I learned the hard way of rehearsing many, many hours. But with the bagpipe, if you rehearse, you lose that beautiful energy.”

A video clip of the ensemble’s sole hourlong rehearsal showed how the group forged this path with much laughter and a sharing of ideas. For Das, “The journey is about reaching a point where I value what these guys do, how they make it beautiful, how they make it free for themselves. And I feel very enriched that I can enjoy both worlds.”

Monday’s panel discussion was a preview of Friday’s Silk Road Ensemble concert at 8 p.m. in Sanders Theatre. (Eldebek will not be part of Friday’s concert.) The concert is sold out, but there will be a line for standby admission.