A call for ideas 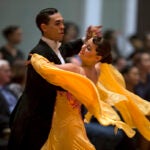 The article found that “HBS is a place you go to if you want to start a company,” Nohria said, prompting enthusiastic applause from the audience. “It only takes one simple idea to change the world, and that’s what today is all about.”

Nohria’s words may have especially resounded with one section of his audience, a group of local high school students who had participated in an “Entrepreneurship 101” event at the Harvard i-lab just days before. Nancy Boccia, project manager for the competition, said the event arose out of a discussion on how to involve the community with HBS efforts, and to bring Boston’s young people to campus.

“We were talking about how to get more community people to come to the competition finale and really see what’s in their backyard,” she said. “If we can do something to engage them in what Harvard does, we felt that would have a really strong impact.”

A joint effort among HBS, the Harvard Ed Portal, and the Harvard i-lab, students from Brighton High School and the West End House Boys and Girls Club came to campus to work with HBS students, brainstorm ideas for new companies, and tour the i-lab facilities.

HBS students began “Entrepreneurship 101” by talking about the basics of the process, explaining that entrepreneurs didn’t necessarily have to come up with something new, but something better. M.B.A. student Michael Segel pointed out that many other search engines already existed when Google was launched. It was because Google was a better search engine that it became the giant it is today.

The event also shared the stories of young, successful entrepreneurs who launched successful ventures when they were even younger than the high school students. One example, they said, was Cory Nieves, who launched Mr. Cory’s Cookies when he was just 9 years old.

“Chocolate cookies aren’t anything new,” Segel said. “But because they were Cory’s passion, and because he was committed to working night and day at it, he sells thousands of his cookies a week.” The key to entrepreneurship, Segel said, is “to make something that somebody else wants, and is going to pay for it.”

As students split into groups to brainstorm problems that could be solved with one simple idea, while coming up with their own diverse solutions to that problem, HBS leaders and local community leaders watched the ideas fly.

Mark DaCruz, director of teen services at the West End House Boys and Girls Club, was on hand for the event, calling it “a real opportunity” for the local students.

“We were really lucky to meet Nancy and work with the Harvard Business School,” he said. “It was a great chance to get another perspective on what the NVC is about. You never know what kids are going to gravitate toward and stick to, but watching them today, I think they’re really beginning to relate to some of the stories and ideas that they’re hearing.”

Asked about the impact of coming to HBS, DaCruz said it could be long-lasting. “I think it plants a seed,” he said. “Who knows, maybe one of them has a million-dollar idea that no one else has thought of, and it changes everything.”