Making sustainability part of the business 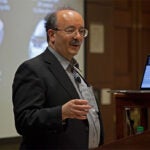 Some people see climate change as a distant threat whose severest impacts won’t be felt for decades. But the head of one of the world’s largest consumer products companies says it’s here now, and it’s hurting business.

Paul Polman, the chief executive officer of Unilever, maker of several brands familiar to American consumers, including Ragu, Hellmann’s, Ben & Jerry’s, and Q-tips, said the company is being set back between $300 million and $400 million each year because of climate change. And that’s part of the reason Unilever has begun trying to reduce carbon emissions and working with subcontractors to ensure its operations are sustainable.

“Business cannot just be a bystander; you have to be an active participant,” Polman said.

Polman spoke Friday at Harvard Business School’s (HBS) Spangler Center as part of a weeklong series of events focused on climate change that was organized by the Harvard University Center for the Environment. His visit was hosted by Rebecca Henderson, the John and Natty McArthur University Professor and co-director of HBS’ Business and Environment Initiative.

Polman said the issue needs leadership, not because people don’t see what should be done, but because it’s hard to do. Training the next generation of leaders, he said, is a crucial role of academic institutions such as Harvard. He identified two linked problems, climate change and global poverty, that this generation has a unique opportunity to address. Poverty is related to climate change, he said, because if done improperly, the development needed to address it can increase the greenhouse-gas emissions that lead to climate change.

Polman said that the situation today is similar to that at the beginning of the Industrial Revolution, when Richard Arkwright mechanized spinning fibers into thread or yarn. Arkwright, Polman said, took stock of a rapidly shifting industrial climate and created transformational change, despite resistance from people who spun thread and yarn by hand, whose livelihoods were at stake.

Though fossil-fuel-based businesses have a stake in resisting a future that relies on alternative energies, Polman said young entrepreneurs “don’t see it as a challenge, they see opportunity. They don’t see threat, they see it as an imperative to change the business model.”

As the impact of climate change continues to be felt, he said, even capitalists unconcerned about the environment will begin to care about its effect on the bottom line. In Brazil, for example, Unilever’s shampoo sales are down 15 percent, a drop Polman attributed to the longest drought in 80 years, which has reduced reservoirs to just 20 percent of capacity.

Polman said he hopes that world leaders will take concrete steps to address the problem when they meet in Paris later this year for the latest climate-change summit. Climate-change deniers, he said, are a relatively small minority, but perhaps more dangerous are those who acknowledge the problem but say nothing can be done.

Not only can something be done, it must, he said, and there are plenty of targets. Currently 30 to 40 percent of the food supply ― enough to feed 1 billion people — is wasted, and releases the greenhouse gas methane as it rots. Air pollution is so severe in India, which contains half of the 30 most polluted cities in the world, that 650,000 people die prematurely each year because of it. Steps to clean up the air can address both local particulate pollution and climate change.

Polman said there are success stories to emulate. Denmark, for example, has tripled its economy since 1995 while reducing carbon emissions, showing that growth doesn’t have to mean increased release of greenhouse gases.

“The cost of inaction is significantly higher than the cost of action,” Polman said.