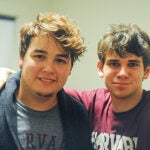 Lowell House Opera has been in operation since 1938

The year 1938 is memorable in New England for the Great New England Hurricane, the deadliest and most powerful one in the region’s history. The storm’s winds gusted to 186 mph, produced a tide of 20 feet in downtown Providence, and took 564 lives. But 1938 also marked the start of an annual cultural whirlwind with its own enduring legacy: the Lowell House Opera, the longest continually performing opera company in New England. Each year the Lowell House dining room is converted to a stage and theater for an opera performed by professionals, students, and community members, with a 64-piece volunteer orchestra. Students learn firsthand from experienced opera personnel, and the combination of talents makes for a vibrant, energized production.

This year’s opera was Tchaikovsky’s “The Queen of Spades,” never before fully staged in Boston, and seldom presented in this country at all. Based on a short story by Alexander Pushkin, the opera follows the anguish of Gherman, an officer whose passion for the lovely Liza, already engaged to a nobleman, is coupled with an obsession to learn her grandmother the countess’ secret strategy for winning at cards. After the elderly Countess dies without disclosing her secret, her ghost returns to reveal the winning hands … before she exacts her revenge at a final card game and Gherman’s obsession turns to madness.

Performed in the original Russian with subtitles projected onto the set, “The Queen of Spades” offers a visceral, volatile production complete with elements of Russian drama: competing suitors in a tortured love affair, the psyche descending into insanity, aspects of the supernatural, and death by suicide. With a lively, innovative production such as this, the Lowell House Opera seems destined to continue forging its own legacy, begun in the memorable year of 1938, well into the future.