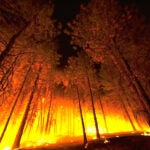 Harvard to host week of events, discussions on ways to tackle problem

In a speech on climate change delivered during her visit to China last month, Harvard President Drew Faust described the problem as “a struggle, not with nature, but with ourselves.”

During Climate Week April 6-10, Harvard will take a long look at the ongoing struggle to find man-made solutions to this man-made problem. Spearheaded by the Harvard University Center for the Environment (HUCE), next week’s events will feature everything from informal breakfasts with climate scientists to more traditional lectures by prominent experts to social and literary gatherings inspired by the Earth’s biggest environmental conundrum.

HUCE Director Daniel Schrag, the Sturgis Hooper Professor of Geology and professor of environmental science and engineering, said the week presents an opportunity for members of the Harvard community to engage on the issue, discuss, and learn.

“I deeply believe that climate is an issue that affects every part of the University. Scholars in every School have something to contribute to the problem of climate change,” Schrag said. “Everybody’s perspective matters. That’s at the core of the philosophy of the Center for the Environment.”

The center is taking a lead role in organizing the events, but Schrag credited the idea to John and Natty McArthur University Professor Rebecca Henderson, co-director of Harvard Business School’s Business and Environment Initiative.

“Dan and I have been talking for some time about how best to highlight both the urgency of climate change as a problem and the huge array of exciting work that’s going on across Harvard to address it,” Henderson said. “And we thought an event like Climate Week might be an ideal way to accomplish both objectives and to simultaneously generate excitement and engagement across the campus.”

During her March 17 speech at China’s Tsinghua University, Faust, who has identified climate change as a major priority for the University and who will host a panel discussion on the topic April 13, said that universities have a key role to play in “what must become an energy and environmental revolution” if the problem is to be solved.

At Harvard, action on climate change spans the University community. Students can choose from 243 courses offered on energy, sustainability, or the environment, and they have the option of studying a new secondary field in energy and the environment. Faculty members teach and conduct research, with 239 engaged in energy or environmental research and affiliated with HUCE. Staff members are also helping the University become more sustainable in its own operations.

In February, the president’s office announced seven grants from the Climate Change Solution Fund, established in 2014, for projects by faculty members and graduate students. Those projects investigate reducing food waste, which amounts to 40 percent of our food supply; extreme weather expected in a climate-changed world; low-carbon energy strategies for China, the world’s biggest greenhouse gas emitter; advances in transforming solar energy to fuel; regulatory controls to reduce air pollution in India; and the economic impediments to the use of biofuels.

In her China speech, Faust highlighted another climate change-related initiative, the new Center for Green Buildings and Cities at the Harvard Graduate School of Design. Headed by Ali Malkawi, professor of architectural technology, the center is seeking design and material solutions that will foster a new generation of green buildings and, on a larger scale, urban centers.

“The most important action on U.S. climate policy right now is happening in the legal domain. … Not surprisingly, every EPA rule on climate has been challenged in the courts. Defending the legality of these rules is absolutely critical to successfully addressing climate change domestically,” Freeman said. “And as scholars at Harvard Law School, we have an opportunity to play an important role explaining the legal implications of these rules.”

Climate Week will provide a gateway to the ongoing and multifaceted conversation around climate change for members of the Harvard community, and seeks to convey, if nothing else, that everyone’s efforts, perspective, and expertise are needed, Schrag said.

“It’s a week when there are opportunities for everybody at Harvard to participate in an event on climate change in some way and find that there’s something relevant to them, that they have a voice, that they have a role to play,” he said.