How to recast antiquity 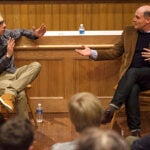 At the heart of ‘Mad Men’

Near the end of the 19th century, the director of the Harvard Semitic Museum, David Gordon Lyon, turned to a kind of virtual reality to help him augment the museum’s teaching and displays. But the cutting-edge equipment of the day didn’t involve digital technology or flashy 3-D software. It involved plaster.

Following a quick request to museums in London, Paris, and Berlin, Harvard was soon the recipient of copies of Mesopotamian masterpieces: plaster casts of original, vivid reliefs from the ancient world. Many of the originals once adorned the walls of the massive Assyrian royal palaces at Nimrud and Nineveh, both in what is now northern Iraq.

At Harvard, the reliefs were displayed in the museum’s galleries and used in classrooms for years. But today many of those 100-year-old casts are crumbling, and a group of Harvard professors, curators, and students is working to save them for future generations to work with and view.

As part of the General Education course “Ancient Near East 103: Ancient Lives” and with support from the Elson Family Arts Initiative Fund, Harvard students are fashioning new, lighter, more durable copies of the old casts from resin. The result is a boon for the museum, which is overhauling its third-floor galleries, and a chance for students to touch antiquity.

“The students are learning something about the creation process up-close and personal with these wonderful Mesopotamian reliefs and contributing in a very physical way to the revitalization of our gallery spaces,” said Peter Der Manuelian, the museum’s director, who is helping lead the project.

The course delves into the early human civilizations that were thriving in Mesopotamia more than 3,000 years ago.

“What’s relevant about studying the ancient past? It’s insanely interesting,” said Gojko Barjamovic, the course’s instructor. Peering back in time offers students a look at the foundation for “the givens in our daily lives,” he said: how people organize themselves, what they do when they arise in the morning, the music to which they listen, the gods to which they pray. “Looking at that timespan and looking at what it is fundamentally to be human teaches us an enormous amount about not only them, but about ourselves.”

Still, making the ancient past come alive can be tricky, so Barjamovic entices his students by engaging their senses. With the help of Harvard’s Center for Geographic Analysis, students have re-created detailed maps of the area for the course. They have played a reconstructed, 4,500-year-old instrument, and listened to some of the world’s earliest known music. During a recent lab, they cooked a three-course Mesopotamian meal following ancient Babylonian recipes. “To tempt people to commit a semester of their life to something so strange and far away as ancient life,” he said, “you have to think about how to make it meaningful.”

Helping re-create the ancient reliefs is meaningful, said Barjamovic, and fits his teaching-to-the-senses approach. About half the class signed up for the 30 hours per student the museum requested to help with the restoration of eight plaster casts. The additional hours and hands have dramatically reduced the work for Adam Aja, the museum’s assistant curator of collections. Aja recently spent almost an entire semester restoring and recasting one relief on his own. Thanks to the students, the process has been trimmed to about a week per cast.

“With a little training, they are doing a fantastic job,” Aja said. “They are getting up to my standards.”

The original reliefs once hung in the throne rooms and banquet halls of the palaces of Nimrud and Nineveh, the massive homes of the great Assyrian rulers Assurnasirpal II (883–859 B.C.) and Assurbanipal (668–627 B.C.). Some reliefs display battle scenes; others portray the hunt. On one restored relief, Assurbanipal, on horseback, drives his spear into the jaws of a lunging lion. The artworks’ threatening themes, captured in striking detail by expert craftsmen, signaled to foreign dignitaries and Assyrian subjects the king’s undisputed power.

On a recent afternoon, two sets of students were hard at work in the museum’s basement. One group gently repaired a large relief. Using small brushes and a mixture of fine marble powder and glue, they smoothed over holes and filled in cracks in the chipped plaster. Next to them, two students carefully prepared a bright-green silicone formula in small plastic buckets, then painted the mixture onto another restored cast. (When dry, the rubber is peeled from the plaster and used as the mold for a new resin cast.)

Sophomore Georgia Stirtz, her hands in blue latex gloves, spread the silicone onto the surface of a restored relief. “I feel like there’s a much deeper connection when you are actually able to see the thing in real life rather than just on a slideshow,” she said. “Seeing that this simply exists in the world is very different from actually being able to touch it and work with it.”

With fighting in the region continuing between the Iraqi government and the self-declared Islamic State, the Harvard project has taken on even greater meaning. In recent months, videos posted online have show ISIS militants destroying the very palace in Nimrud that once housed the Harvard reliefs, and smashing antiquities from Iraq’s Mosul Museum.

“That was heartbreaking,” said Stirtz. “I didn’t know much about that until recently. It makes this [work] all the more important.”