Higher than the sky 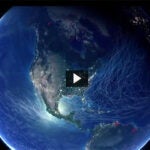 Hopping on a videoconference to chat with colleagues or business partners in far-flung locations is pretty standard workday fare for most corporate executives. But it’s not often that such calls take place with one party sitting comfortably inside Harvard Business School (HBS) while the other orbits Earth in a microgravity laboratory.

That happened Wednesday afternoon when NASA astronaut Terry Virts dialed into HBS and spoke live from space for 30 minutes to a packed house of faculty and executive education students at the Spangler Center about his work as commander of the International Space Station. A colonel in the U.S. Air Force and a decorated military pilot, Virts is a 2011 graduate of HBS’s General Management Program (GMP).

“One of the questions everyone in the GMP is dying to ask: ‘You are a colonel in the U.S. Air Force, you’re an astronaut … so, what were you doing in GMP?’” joked Sunil Gupta, the Edward W. Carter Professor of Business Administration at HBS, who led the session.

“I just loved it,” said Virts, wearing his HBS T-shirt. “To be honest, that was the best commander training I had: small group dynamics, it was very international, as you know … the way we did feedback. … As a fighter pilot and as an engineer, we don’t normally think about stuff like that. But it really is important, especially if you’re on a mission for six months on an international crew like I am here.”

The space station travels 5 miles per second and circles the Earth once every 90 minutes. Virts has been there since November, attending to a variety of scientific research work involving biology, material science, human physiology, and astronomy, as well as tasks such as making repairs to the space station, guiding robotic arm operations, conducting space walks, and taking stunning photos that often end up on the space station’s active Twitter feed.

He returns to Earth next month.

“It’s been neat to see Earth this way because now I recognize countries by the color of the dirt there, what the mountains look like, or if there’s a lot of jungle,” he said of peering down at the planet from on high.

Each night before bed, Virts likes to pad down to the station’s cupola, a module with seven windows, turn on some music, and watch the dramatic thunderstorms over Central Africa roll by, storms filled with lightning so bright they light up the module.

Not surprisingly, Virts described his three spacewalks so far as “awesome.”

“You’re in outer space, and that’s not where humans are designed to be — it’s just incredible,” he said. “To see the sun rise really stuck out to me, to see this long blue/red/orange strip that was just so huge. That is one of the impressions that I’ll never forget, for sure. I wish the cameras could capture it because I saw colors I’ve just never seen before.”

Crossing over Africa and the Mediterranean Sea every day offers a unique vantage point in other, more human, respects, too. “We fly over all the trouble spots, and we’ve seen things from here, and you look out and you think, ‘Why is that going on? There’s no reason for that to be happening,’” he said. “It’s unfortunate that everyone can’t have this perspective.”

Virts and his crew are currently getting the space station ready to welcome new NASA vehicles built by Boeing and SpaceX, and the eventuality of commercial flights and “space tourists” such as English singer Sarah Brightman, who is scheduled to visit the station in September, he said.

But because a successful launch requires getting up to speeds of more than 17,000 miles per hour, the current per-seat cost for such tourists is in the “tens of millions” of dollars, making regular travel to space for ordinary people still a ways off.

“Even in the reduced-cost environment that we’re hopefully moving toward, it’s still an expensive proposition to get going that fast and do it safely. And even more importantly, returning to Earth,” said Virts, calling space tourism “a good thing.”

“The more space flight we do, that will bring the overall cost down.”