Health as an economic engine 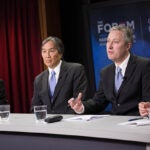 A Harvard program aimed at improving health care systems around the world brought more than a dozen finance ministers to campus this week, seeking to convince those who hold the power of the purse that good health is good economics.

Delivering the forum keynote at a dinner panel Tuesday at Harvard Art Museums, Charles W. Eliot University Professor Lawrence Summers told the ministers that improving the health of their citizens would pay for itself many times over, with benefits outstripping costs by a ratio of between 9:1 and 20:1.

Summers said the world has a once-in-a-generation opportunity to better the health of billions, bringing about what he called a “grand convergence” in which nations struggling with poor health can institute improvements that bring them to the level of more modern, industrialized countries.

The Ministerial Forum for Finance Ministers, part of the Ministerial Leadership in Health program co-sponsored by the Harvard T.H. Chan School of Public Health and the Harvard Kennedy School, brought ministers from 13 nations in Africa, Latin America, Southeast Asia, and the Caribbean to Harvard.

The program’s aim is to improve health care leadership in developing nations. Though health ministers may seem the likeliest target, strong input from finance ministers is also crucial to the effort, said Michael Sinclair, executive director of Ministerial Leadership in Health.

“The evidence [of the economic impacts of improved health] is very clear, in terms of worker productivity, reduced absenteeism, increased economic mobility. We’re focusing on trying to get better efficiency and effectiveness in health budget utilization.”

The four-day forum, which wrapped up Wednesday, included workshops and talks with Harvard faculty members from HSPH, HKS, and Harvard Business School.

Follow-up with participants is part of the initiative, Sinclair said, to create a network of finance and health ministers (a separate session is held annually for the latter) through which they can share ideas and solutions to the knotty problems they’ll face on returning home.

“We’re trying to build global leadership capital in health,” Sinclair said. “We try to seek out countries that are challenged, but with real promise, in terms of the talent of their ministers.”

Ezra Suruma, a participant in the program and former finance minister of Uganda, said he was particularly interested in the discussion about implementation, since that has been a key challenge in the African nation.

Poor health and short lifespan were common worldwide until the early 1800s, Summers noted. Dramatic advances in public health and medicine in industrialized nations over the last two centuries have created a world of haves and have-nots, a situation that could be improved through collaborative action, he said.

Not only are health improvements sure to bring economic benefits, Summers said, but the resources needed are relatively modest, requiring just 1 percent of the incremental growth in gross domestic product that would result from the investment.

He pointed out that the right policies alone are insufficient. Implementation of those policies is key, with proper implementation depending on transparency and measurement.

Also important, Summers said, is cost-benefit analyses, so that the programs that will save the most lives rise to the top.