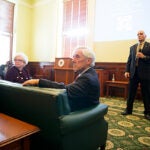 Urges them to pursue big ambitions in public health

As the chief executive officer of the Bill & Melinda Gates Foundation, Sue Desmond-Hellmann leads a multibillion-dollar effort to improve health and promote equity for people around the world.

Speaking to a Harvard T.H. Chan School of Public Health audience on World Health Day Tuesday, Desmond-Hellmann recalled her own idealistic student days and made the case for pursuing big ambitions in public health. Her talk was part of the Dean’s Distinguished Lecture series.

Desmond-Hellmann shared the “Big Bet,” an ambitious series of goals issued by the Gateses in their annual letter marking this year’s 15th anniversary of the foundation. It states, “The lives of people in poor countries will improve faster in the next 15 years than at any other time in history. And their lives will improve more than anyone else’s.” Desmond-Hellman challenged Harvard Chan students to help make that bet a winner.

Desmond-Hellmann praised the often unsung work of epidemiologists. She said the greatest innovations in public health develop from the way epidemiologists think — with an understanding of the patterns and causes of disease.

These days, she is particularly excited about innovations in health care delivery and in promoting behavior change, she said. Two recent examples are the foundation’s work providing seed funding and support to GAVI, a global alliance to give children in the world’s poorest countries increased access to vaccines, and the transformation of the foundation’s polio operations center in Nigeria into an emergency Ebola care center in July — within hours after an outbreak was detected in the city of Lagos.

Desmond-Hellmann spoke about the tough decisions the foundation has to make in determining what to fund, and noted that she tries to look for areas where it is uniquely positioned to make a difference, such as infectious-disease eradication and maternal health.

Prior to joining the foundation in 2014, Desmond-Hellmann served as chancellor of the University of California, San Francisco, where she remains a tenured professor. An oncologist, her work in research and development at Genentech helped bring breakthrough cancer drugs to the marketplace.

Harvard Chan School Dean Julio Frenk praised her depth of experience in his introductory remarks, noting, “Sue personifies all the career paths that any of our students could hope to achieve in one lifetime.”