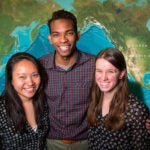 Roland Fryer, the Henry Lee Professor of Economics, has been awarded the American Economic Association’s John Bates Clark Medal for his pioneering research on the economics of race and education.

Among the most prestigious awards in economics, the medal is presented annually to an American economist under 40 who, according to the association, has made “the most significant contribution to economic thought and knowledge.” Fryer, 37, is also the first African-American to receive the honor.

“My reaction when I received the call informing me of the award was disbelief,” Fryer said. “I asked that they put it on the website so I could believe it. Putting the shock to the side, the overwhelming feeling is one of happiness for my field.

Fryer joined the Harvard faculty in 2003 as one of the youngest professors in the history of the University, and at just 30 became the youngest African-American to receive tenure from Harvard.

Even before coming to Harvard, Fryer had distinguished himself with his novel approach to questions of race-based economic issues and of why African-Americans are harder hit by poverty than other demographic groups.

In another oft-cited investigation, Fryer investigated the phenomenon of African-Americans “acting white,” by studying black teen students who perform better in school than their peers, and possible workplace biases against job applicants with unusual first names. Fryer has used the lens of economics to study issues that touch on a wide array of social concerns, including Ku Klux Klan membership, school segregation, and outcomes for children of mixed-race partnerships.

Fryer in 2008 founded EdLabs (the Education Innovation Laboratory at Harvard University) to promote research efforts into racial disparities in education, and he continues to serve as the organization’s faculty director.

“The John Bates Clark Medal is an amazingly prestigious award,” Economics Department Chair Gregory Mankiw, the Robert M. Beren Professor of Economics, said yesterday during a brief ceremony to honor Fryer. “Today we have seven members of this department who have received this award, and that is an amazing group of people. This is a great honor for the department, for the University, and especially for Roland.”

“This is an incredibly well-deserved honor for someone who has done work that has enlightened us all,” added Lawrence Katz, the Elisabeth Allison Professor of Economics. “I think it’s extremely meaningful that the American Economic Association is providing this recognition to Roland Fryer.

“Roland is someone who has dedicated his scholarship, and much of his life, to making progress on what are probably some of the most intractable and difficult problems in the world, and certainly in the United States,” Katz continued. “There is no issue that’s been more difficult for this country to deal with than those concerning the historical and contemporary racial divide, and the themes that Roland has developed in his amazing work, I think, can help bring us toward both a more just and more productive society.”

Fryer is the recipient of numerous other awards and honors, including a Sloan Research Fellowship, a Faculty Early Career Development Award from the National Science Foundation, and the inaugural Alphonse Fletcher Award.

Fryer is a 2009 recipient of a Presidential Early Career Award for Scientists and Engineers. In 2009, he appeared on Time Magazine’s annual list of the world’s most influential people. In 2011, he was awarded a “genius” grant from the John D. and Catherine T. MacArthur Foundation. In 2012, he was awarded the Calvó-Armengol International Prize, which is one of the most prestigious prizes recognizing young economists and social scientists.