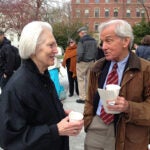 Julio Frenk, dean of the Harvard T.H. Chan School of Public Health, will become the next president of the University of Miami, it was announced today. Frenk, the T & G Angelopoulos Professor of Public Health and International Development (a joint appointment with the Harvard Kennedy School), will step down at the end of August and assume his new role on Sept. 1.

“My time as dean of the Harvard Chan School has been among the best experiences of my career, and the decision to step down was only made after deep reflection,” said Frenk. “I am extremely proud of all that has been accomplished during my time at this school, and am excited at the opportunity to lead a university with great upward momentum and thereby continue to create and deploy knowledge for the greater good.

“My excitement about taking the helm of the University of Miami owes much to Harvard President Drew Faust, whose expansive vision of universities has greatly influenced my own thinking,” said Frenk. “Under her tutelage, I have come to believe that universities have an essential role to play if humanity is to meet the many challenges of the 21st century.”

Frenk assumed the role of dean in January 2009. He has presided over a dramatic expansion of the School’s international reach, the reimagining of its mission to focus on four global public health challenges, a major revamping of its curricula, and the renaming of the School to honor T.H. Chan after a historic $350 million endowment gift by The Morningside Foundation.

“Julio has energized the Harvard Chan School with his extraordinary devotion to how universities can enhance the health of populations around the world,” said President Drew Faust. “He has combined high ideals with clear-eyed pragmatism, scientific rigor with humane compassion, all in the service of improving the understanding and practice of global health in the 21st century.

“It’s clear from their choice that the University of Miami’s trustees share Julio’s own qualities of wisdom and foresight, and that they have discovered in him the remarkable leadership capacity and vision with which he has graced Harvard these past six years,” said Faust. “We thank him for his service to Harvard, to higher education, and to human health.”

Faust indicated that she will name an interim dean in the coming months as the University launches a comprehensive search for Frenk’s successor.

“Today, the University of Miami selected a world-renowned scholar and leader as its next president,” said Stuart A. Miller, chair of the University of Miami Board of Trustees. “Dr. Frenk has been called ‘a visionary, an insightful analyst, an institutional innovator, and a pragmatic problem solver’ and, speaking for the entire board, we could not agree more.”

In his first address as dean in 2009, Frenk declared that he wanted the Harvard School of Public Health, as it was then known, “to be the first school of public health of the 21st century.”

Frenk arrived at the School at the height of the global financial crisis and during a period when government funding for scientific research — which constitutes more than 60 percent of the School’s revenue — was shrinking. He successfully guided the School through those financially turbulent waters while simultaneously encouraging faculty and students to ambitiously address on a global scale what he believes are the four most important health threats facing our world today: old and new pandemics, including AIDS and Ebola, obesity, and cancer; social and environmental threats to health, ranging from violence and racial disparities to pollution and occupational hazards; poverty and humanitarian crises; and failing health systems in the U.S. and internationally.

During his tenure, Frenk and the faculty also significantly reshaped the School’s educational strategy, reimagining how to develop future public health leaders and placing a greater emphasis on case-based learning, interactive activities, and other pedagogical innovations.

The results of those efforts included creation of a new Doctor of Public Health (DrPH) degree program as the flagship professional doctoral degree for public health leaders, and establishment of Harvard’s first “blended” master’s degree program offered by one of its graduate Schools, enabling students to pursue a degree in epidemiology through a combination of online and in-classroom learning experiences. During Frenk’s deanship, the School’s faculty also created a new Population Health Sciences Ph.D. program to transform its existing five Doctor of Science (Sc.D.) programs into a single integrated degree for students pursuing careers in environmental health, epidemiology, global health and population, nutrition, or the social and behavioral sciences. Its master of public health (M.P.H.) degree was redesigned and beginning in the fall of 2016 will be the single master’s degree program offered at the School for students planning professional careers in government, civil-society organizations, and private businesses.

Frenk was honored to serve as dean during the School’s centennial in 2013 and kicked off an ambitious capital fundraising campaign that same year. The School quickly exceeded initial expectations with the announcement of a generous $350 million gift — the largest in Harvard’s history — from The Morningside Foundation in September 2014. The School was renamed the Harvard T.H. Chan School of Public Health in recognition of that gift.

Before his appointment as dean, Frenk had served in a series of important leadership positions in the field. From 2000 to 2006, he was Mexico’s minister of health, a role in which he instituted a comprehensive health insurance program known as Seguro Popular, which expanded access to health care to millions of previously uninsured Mexicans. He was the founding director-general of Mexico’s National Institute of Public Health. From 1998 to 2000, he served as executive director of Evidence and Information for Policy at the World Health Organization (WHO).

Frenk earned his medical degree from the National University of Mexico, as well as a master of public health and a joint doctorate in medical care organization and in sociology from the University of Michigan. He is a member of the U.S. Institute of Medicine, American Academy of Arts and Sciences, and National Academy of Medicine of Mexico.

In addition to his scholarly works, which include more than 140 articles in academic journals, as well as many books and book chapters, he has written two best-selling novels for youngsters explaining the functions of the human body.

In September of 2008, Frenk received the Clinton Global Citizen Award for changing “the way practitioners and policy makers across the world think about health.”

About the Harvard T.H. Chan School of Public Health

Founded in 1913 as the Harvard-MIT School of Health Officers, the Harvard T.H. Chan School of Public Health brings together dedicated experts from many disciplines to educate new generations of global health leaders and produce powerful ideas that improve the lives and health of people everywhere. The School’s community of leading scientists, educators, and students works together to take innovative ideas from the laboratory to people’s lives — not only making scientific breakthroughs, but also working to change individual behaviors, public policies, and health care practices. Each year, more than 400 faculty members at the Harvard Chan School teach 1,000-plus full-time students from around the world and train thousands more through online and executive education courses. The School is recognized as America’s oldest professional training program in public health.