‘Confronting Violence’ through arts and activism 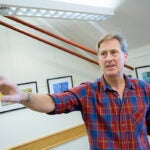 Radcliffe conference and exhibit explore entrenched challenges from all sides

The chain-mail bikini is not only impractical, it’s dangerous. Not simply because of the lack of protection it would afford Red Sonja, the sword-wielding warrior who wears it, but because of the misogyny it overtly embodies, promoting the idea that a supposedly strong woman is only as important as her sexual appeal.

“Red Sonja originally wore a tunic covering her arms and body,” explained Tony Davis, proprietor of the Harvard Square comic-book store Million Year Picnic. “That devolved into the chain-mail bikini.” Indeed, the muscled heroine on display at Radcliffe’s Johnson-Kulukundis Family Gallery in Byerly Hall appeared barely contained by her scanty armor. Her comic book is one of 36 that can be perused in “Confronting Violence: Critical Approaches to American Comics and Video Games,” up through April 17.

The one-room exhibit opened on Tuesday as a lead-in to “Confronting Violence,” a conference at the Radcliffe Institute for Advanced Study. Along with the comic books (supplied by Davis, who spoke about the historical context of the popular form), the exhibit features wall texts discussing both comics and video games.

On one wall a video presentation features media critic Anita Sarkeesian’s “Feminist Frequency” discussions of misogyny and violence in video games. Against another, attendees are invited to play the latest version of “Tomb Raider.” In this fourth iteration of the popular video game, heroine Lara Croft (portrayed in the film version by Angelina Jolie) not only has a backstory but, after three generations of short shorts, finally gets to wear long pants.

The opening remarks provided context for the exhibit, asking why comics and games matter. “Where do we develop our ideas about gender and violence?” asked Janet Rich-Edwards, planning committee chair for the conference, co-director of the science program Academic Ventures at the Radcliffe Institute, associate professor of medicine at Harvard Medical School, and associate professor in the department of epidemiology at the Harvard T.H. Chan School of Public Health. “For many children in the United States, it may be in our comic books and in our video games.” This exhibit, she went on to explain, is intended to “provoke our thinking about gender and violence.”

In the fantasy worlds of comics and games, the two are often linked. As the Sarkeesian video explains, women are often portrayed as pawns in male games, existing merely as prizes for valor or forfeits, to be stolen or killed as a punishment or spur to (male) action. Even previously strong female characters may succumb. When Wonder Woman joined the Justice Society of America in a later iteration of her comic book, said Davis, “they made her the secretary.”

Among the 36 recent comic books in the exhibit, some progress can be seen. Strongly feminist and gender-neutral comics like “Lumberjanes” and “Momeye” offer fun and brightly colored alternatives to the retro Red Sonja and Vampirella. But the path isn’t exactly clear. A little more than three years ago, DC Comics launched its “new 52” series. Among these (and on display) are a revamped “Catwoman” that opens with the feline antiheroine and Batman in a sexual clinch — only somehow, Batman retains his clothes, while Catwoman is shown in various stages of undress.

Referring to these illustrations — and the physically impossible poses on some of the covers — Davis mentioned the Hawkeye Initiative. That project reimagines male superheroes in outfits as flimsy as those on their female counterparts, and in the same awkward poses designed to showcase breasts and behinds. “You realize people don’t dress like that, they don’t move like that,” he said. “It’s enlightening and also very funny.”

Talking about videogames, Arnold Worldwide production artist and industry veteran Giuliana Funkhouser discussed how women are beginning to change the field from the inside, as female gamers and indie developers start to make their mark. Ultimately, said Funkhouser, the rapid rise of cellphone and tablet technology “make it easier for lots of different kinds of people to get into the field.”

The two-day “Confronting Violence” conference and symposium will continue the discussion of how activism and cultural change, including considerations of gender, can affect public policy and reduce violence. The program, which includes considerations of gender, begins with an artistic event and discussion that features hip-hop music on April 9 and continues with a full day of presentations and discussions on April 10, will be held at the Knafel Center, 10 Garden St., Cambridge. It is free and open to the public. Register online at www.radcliffe.harvard.edu.